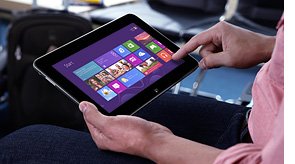 One of the big issues in the IT space is the growing acceptance by organizations that employees want to bring their own devices into the office.  This trend, called “bring your own device” or most often called “BYOD” has been gaining traction over the last few years.

One of the largest issues with BYOD is a simple yet important issue and has to do with the most basic of IT Functions – security.   Allowing users to bring in their own devices and connect to the corporate network is just asking for headaches for the information technology team.

In the past, IT has had to build special processes to allow users to bring in their own devices. This often meant that an IT professional would have to take the device, scan it for security issues and work through a large security process to get the new device onto the network.

With the release of Windows 8 for both mobile devices and PC’s, in addition to new Microsoft management features, the headaches found with BYOD might just be solved…or at least alleviated.

A few features that Windows 8 brings to the table to help with the BYOD headaches:

While these are just a few of the new features in Windows 8, they are important ones and will go a long way toward removing BOYD headaches for IT professionals.

In addition to features within Windows 8 and new security/management features, new PC’s, tablets and phones are coming into the marketplace to help take advantage of mobility and BYOD. With the release of Windows 8, Dell has released a few enterprise and consumer devices with Windows 8 available.   A few examples of some of Dell’s new machines:

By combining new features in Windows 8, new management functionality and new Windows 8 machines, IT professionals and consumers can start to alleviate some of the headaches that BYOD has historically meant for IT groups.

Eric, there’s a newly emerging way to control this. We’ve done this through AWS, but it could be done with any other cloud technology (I think.). We moved our data center and all our desktops to AWS. Essentially, workers RDP into their work “desktop”. Workers can use any device they want to, what they work on is the company’s “remote” desktop. There are a couple security features that can be enabled, which make this option interesting for companies. 1. The ability to copy files “off” the company desktop is disabled. 2. Everything someone does on the company desktop can be… Read more »

Thanks Andrew…sounds very interesting. I’ve seen other similar approaches but nothing quite as good as this. Thanks for sharing!