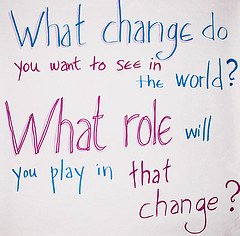 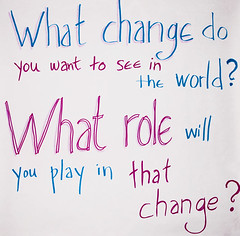 I’m starting to see more people talk about the real need for change within  IT groups.  The big analyst/consulting companies (Forester, Garnter, etc) are putting out a lot of ‘change’ blog posts and articles…see Khalid Kark’s The New CIO — Embrace The Empowered Era Or Step Aside or most of Mark McDonald‘s stuff on his Garnter blog for example. Mark’s been writing about the need for change for as long (or longer) than I have…but I’m just now seeing others following suit.

I love seeing this….its time that IT, the CIO and IT professionals really understand that change is needed. I’ve been writing about the need for change for years in my The New CIO category…change is needed and necessary – and in fact…I believe change is coming.

That said…..there’s another side to the story.

We’ve been talking about the need for IT and the CIO to change.  But…there’s also a need for the entire organization to change.

We can’t ask our IT group to change if the rest of the organization isn’t willing to come along on the road to change.

For example – we want IT to be more flexible and responsive.  But…do we give the IT group the ability to be responsive? Do we allow them to have the flexibility to be flexible (redundant…I know)?

Has the organization told the IT group and the CIO that its OK….that its really OK to embrace change?

I ask these questions because I’ve just had and email conversation with a CIO of a fairly large organization.  He contacted me after reading many of my “The New CIO” posts and wanted some advice.

This CIO, I’ll call him “Mike”, wants to change. He wants his IT group to change.  In fact, Mike said that the people within his group are clamoring for change….but he and his team feel like their hands are tied by the organization.

Its a simple answer…his team is viewed as a ‘tool’ of the organization.

They are the IT group. They keep servers running. They keep the lights on. They are an operational ‘tool’.   In fact- that’s the mission of the IT group as written in the strategic plan for the organization.  An excerpt from that plan (used with permission):

All fine words and necessary too. There’s definitely an operational component to every IT group…but there should also be a strategic component.

I asked Mike to explain his involvement in the strategic planning process. He said he was involved and actually helped chair the planning committee.  A CIO in a role doing more than just focusing on technology…awesome.

I asked Mike to help me understand how the IT group was relegated to being part of the toolbox rather than being one of the carpenters, especially given that he was involved in the strategic planning process.

The CEO and COO think of my IT team as being a bunch of techies with little social skills and even less business accumen.  They feel like the IT group should be seen and not heard.  In fact, they believe that IT should ‘…just make sure the servers keep running’.

There ya have it folks.

You want to know why IT is the way it is?   Because that’s the way the organization wants them to be.

Mike has tried everything to ‘get a seat at the table’ and step into leadership roles within the organization. He’s had some success but at the end of the day, the organization sees him and his team has maintenance folks.

Should they change? Yes.

Will they?  I believe so…but to what extent, I can’t really say.

The moral of this story is this – Yes…change  is necessary.  Change will happen…but its not just the IT group and the CIO that need to change. The entire organization must change.

Reminds me of the chicken and egg story: Which comes first…IT change or organizational change?

[…] Eric D. Brown poses and interesting question for discussion in his piece Which comes first…IT Change or Organizational Change? […]

Which comes first… #IT Change or Organizational Change? via @EricDBrown http://bit.ly/oSi49m

@EricDBrown Good article on IT change trends and challenges – Which come first… IT Change or Organizational Change? http://ow.ly/5UJq0

[…] dirty (or if its really dirty at all)?Rather than clean house, she started another tough task…changing the culture of IT. She began helping her staff rebuild their skills (and their confidence?).  Rather than just focus […]