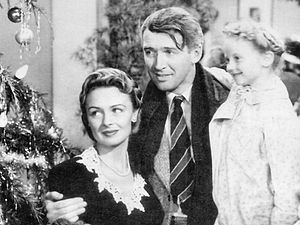 I just saw Clarence jump in the river to save George Bailey from committing suicide.  George was despondent over his life and his business.   He didn’t think he’d been able to do anything right with his life and within his business.

The scene conjured up a thought about CIO’s and organization’s today.  Yes. I know.  Odd.  Why can’t I just enjoy the movie? 🙂

What did the scene make me think about?

I’ve talked to many CIO’s over the past year and almost every one has said something like the following:

George Bailey just said “I wish I’d never been born”…something similar to what CIO’s are saying.  Bear with me…I’m going to make the point clear.

These CIO’s can’t see what their team is doing. Perhaps its because their managers can’t communicate the value of the teams contributions and the value of the projects.  Perhaps the issue has to do with the inability of the CIO to really understand what their IT team does.

This mentality has led these CIO’s to move to outsource the majority of their project work.  They think they can let their team’s focus on operations and outsource the ‘big projects’.

There’s something wrong with this approach though. For most organizations, IT Operations isn’t the core business.  The ‘big projects’ are….  Don’t outsource your core business.

So…back to the George Bailey & Clarence scene.  Clarence jumped in to save George from a huge mistake. That brought me to this question:

Do CIO’s today need a Guardian Angel to jump in and save them?

I don’t think they do.

Many consulting companies act like guardian angels.  They jump in and ‘solve problems’ in the short team but often times I find they do little more than Guard their pocket book.  Who can CIO’s trust to help save them?

Its an easier answer than you’d think. George Bailey didn’t think of it though…it had to have a Guardian Angel save him. But..the CIO doesn’t need a guardian angel.   All the CIO needs to do is take a look at their team…they’ve got all the help they need there.

Today’s IT team has a ton of experience and knowledge just waiting to be tapped.  Most of this knowledge, energy and passion is ignored in many organizations.

Think about George Bailey.  After wishing he never lived, he ended up relying on the townspeople to help him out of a pinch.  Today’s CIO should be able to rely on their IT team to navigate troubled waters.

CIO’s – look to your team first before you look for your guardian angel. You probably have everything you need (knowledge, skills, passion, experience, etc) right where you least expect them.

Back to the movie…George is fighting with Bert & Ernie now. 🙂

Tweets that mention CIO Lessons from Its a Wonderful Life -- Topsy.com

[…] This post was mentioned on Twitter by Eric D. Brown, Luis Saldana and topsy_top20k, topsy_top20k_en. topsy_top20k_en said: Just published – What a CIO can learn from It’s a Wonderful Life http://bit.ly/8C28SG #cio […]

Great post and Merry Christmas, Eric! CIOs need to hire smart people and then get out of the way and let 'em work. Leave the Guardian Angels to Curtis Sliwa.

Thanks Gene. Merry Christmas to you!

Reminds me of what the long time University of Texas football coach Darrell Royal was fond of saying, “You ought to dance with the one who brung you!”

Thanks for stopping by Stanton

CIO Lessons from Its a Wonderful Life from @ericdbrown: http://bit.ly/5HNasF. Please RT.

What a CIO can learn from It’s a Wonderful Life:

RT @ProjectShrink What a CIO can learn from It’s a Wonderful Life http://bit.ly/6aWsTe | Look to your team first before a guardian angel

Shared: What a CIO can learn from It’s a Wonderful Life http://bit.ly/6aWsTe

Just published – What a CIO can learn from It’s a Wonderful Life http://bit.ly/8C28SG #cio

CIO Lessons from Its a Wonderful Life http://ow.ly/16diuu

#baot Reading: What a CIO can learn from It’s a Wonderful Life http://ow.ly/16dfNE

What a CIO can learn from It’s a Wonderful Life:

"Look to your team first" RT @ericdbrown: What a CIO can learn from It’s a Wonderful Life http://bit.ly/8C28SG #cio

What a CIO can learn from It’s a Wonderful Life (a little late reading this!): http://bit.ly/6Vn6Xv