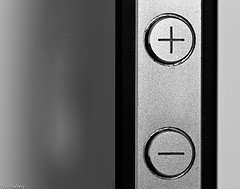 I just read a short article on the Enterprise CIO Forum written by Charles Bess titled Landing a few points about cloud and the shifting expectations of a CIO.  In the article, Charles talks about a few different things but one sentence really caught my eye. Charles wrote:

I never really thought about it that way…but he’s absolutely correct.

In the past, IT and Technology were some of the first areas to get hit with cost cutting measures.  In addition, most CIO’s and IT leaders are extremely focused on ‘cutting costs’ using technology and ‘doing more with less‘.

The focus on cost-cutting and efficiency has led IT groups and CIO’s to become uber-focused on the subtractive areas of IT and technology.  We’ve become focused on what we can do to save money and increase efficiency rather than what value can be brought to the organization via technology.

Rather than focus on taking things away…how’s about we start thinking about adding to the organization?  Let’s change the default sign of IT from a subtraction sign to an addition sign…and maybe we’ll start changing the attitude toward IT from that of a negative to a positive.

Photo Image: Plus or Minus (+/-) By Tom Raftery on flickr

Eric, I’m not sure why it should come as a surprise. IT should be much less expensive than it is. With cloud technology and outsourcing, it should take fewer people and implementation times should be much quicker. That’s what cloud computing, shared resources and outsourcing is all about. I can provide an example from my own experience. In 2001 I worked on a project to implement a new SAP system. There were 30+ people working on the project team, software and project management consulting and it took about two years to implement. What we were doing was really not that… Read more »

@andrewmeyer32 Hi Andrew – I’m not really surprised at all…just never really thought about the usage of the words “subtractive” and “additive”…they are great words to use when thinking about the topic though. I’ve been in similar situations as the one you describe above. I was a part of one web content management system implementation where the entire purpose as stated by the CIO was to “remove people from the web and editorial staff”. That’s the wrong mindset…a CMS can bring a ton of value to an organization…much more value than cost cuts. Thanks for the comment and for stopping… Read more »

I read the same post on ECF but was not surprised at all. I a not even sure andrewmeyer32 is hitting the nail exactly. I think the core issue for IT being viewed as subtractive is that most, and I do mean most, CIO’s and IT managers focus their strategies and budgets on technology and its maint and refresh instead of the business model and revenue models of their organizations. Just look at almost any IT strategy or an actual strategic plan and pretty much all you see are IT’s own projects. That is the heart of every debate on… Read more »

@jbishop Thanks for the comment. You’ve brought up a good point as I can’t recall the last time I saw an IT Strategic plan (that I didn’t help create) that looked at the organization as a whole. That’s part of my education initiative for CIO’s and IT leaders – help them to understand that a technology plan/roadmap has to include more than projects for IT.