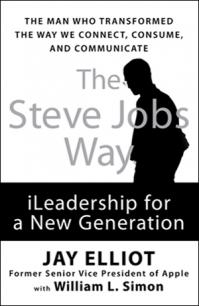 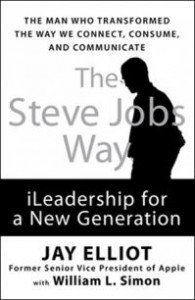 Note: I received a review copy of this book from the publisher / PR firm.

I’m not an Apple ‘fan-boy’ and don’t much like Steve Job’s personality, but I like The Steve Jobs Way: iLeadership for a New Generation (amazon affiliate link).  There’s nothing earth shattering here from a leadership standpoint…but its a good ‘inside Apple’ book that highlights some of the key things Jobs has done at Apple to help push the company to the leadership position it has today.

Don’t let the title fool you though…this is not a treatise on Steve Jobs leadership style, philosophy or his theories on leadership.  You won’t find a ‘recipe’ for building the team that builds the next Apple or iPod or Mac but what you will are some really interested stories about Apple’s internal workings, how Jobs built the initial Mac team and what it was like working with/for Steve Jobs.

There are some really interesting stories in the book…but again….don’t think that you’ll pick up this book and, after reading it, lead like Steve Jobs or Apple did.  It doesn’t work that way for any book.

The book is split into four main sections that cover product, talent, organization and sales/marketing and each provide a very interesting insight into how Apple & Jobs approached each area.  There are many lessons to be learned in each section – such as hiring good, passionate people and put them to work with other good, passionate people.  Like I said, nothing earth shattering here but a good read.

This seems a bit misleading since lliot hasn’t been directly involved in Apple since the mid to late 1990’s. As far as I could tell, he left Apple before Jobs returned the 2nd time. Nothing wrong with that of course…and there’s really a lot to learn from Apple’s founding and release of the Macintosh…but the title of the book made me think that I’d be reading about stories and learning insights from the modern day Apple. The author does talk about Apple during Jobs’ second stint as CEO but its not quite the same as the the insight garnered  while Elliot was still intimately involved at Apple.

Regardless…this is a good book. It won’t really be on the shelf of leadership scholars – but its a good read for those interested in corporate history, Apple’s history and/or Steve Jobs.