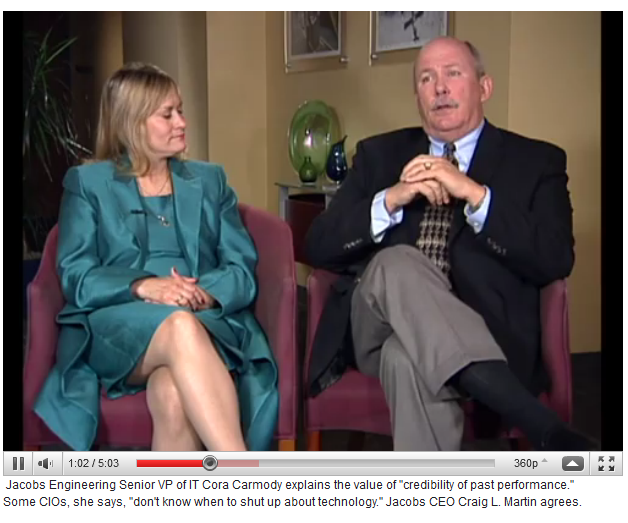 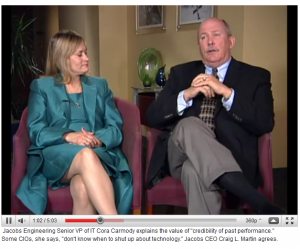 I just finished watching the video on the Enterprise CIO Forum titled Challenge your CIOs: fear not always bad.   Great video that everyone in IT needs to watch…and every CEO should watch too.

My take-aways from the video are:

1.) The CEO really understands that his CIO and his IT group are there to help the business. Cora Carmody, the CIO, and Craig L. Martin, the CEO, are bright folks who understand that IT isn’t about technology…..IT is about business. Sure….the term ‘technology’ is in the group’s name, but IT should be business first, technology second.

2.) I think I’d like to work with Jacobs Engineering (the firm in the video). Anyone from Jacobs reading this, give me a call – I’d like to help 🙂

What i found really (really) interesting is that the CIO was one of the lead figures (if not the lead figure) on the Jacobs Engineering’s Mergers & Acquisition Team.   I know many CIO’s who serve or have served on M&A teams, but most have been relegated to the role of reviewing technology and infrastructure.  In this case it seems, at least from my watching of the video, that the CIO was one of the key leaders of the M&A process and was responsible for reviewing the entire business – including HR, contracts, technology, culture, etc – rather than just the technology aspects.

The key takeaway – the CIO, IT and the IT personnel must be willing to take on business problems rather than just focus on technology and IT. The CEO and CIO at Jacobs seems to have developed a great relationship based around the needs of the business…rather than the technology found in IT.

Perhaps this video is another small hint of the shifting role of the CIO.

Great video…jump over and watch it.

FYI – There are a few other videos from Jacobs Engineering on the Enterprise CIO Forum that look interesting…I’ll be watching them shortly.  One in particular is titled Jacobs Engineering: let end users have any device they want…that should be a fun one to watch 🙂

Published: The shifting role of the CIO http://ericb.co/iHrAdf #CIO

RT @carlhaggerty: The shifting role of the CIO http://j.mp/mwGQ4r < something for @socitm and other #localgov IT folk

RT @carlhaggerty: The shifting role of the CIO http://j.mp/mwGQ4r < something for @socitm and other #localgov IT folk

The shifting role of the CIO http://j.mp/mwGQ4r < something for @socitm and other #localgov IT folk

Just the CEO and CIO sitting down and talking like this demonstrates how critical the latter is to the C level conversation…a seat at the table, if you will. Here’s a couple more similar videos in which the dynamic CIO-CEO duo discuss the impact of their close relationship:

Absolutely John. You can definitely tell how much the CEO respects the CIO and vice versa.

Thanks for the additional links…I’ll check them out.

Re: #CIO as biz leader. How they got there important. Hidden story is process, not duties. Re: @ericdbrown blog http://ow.ly/4TNG3

thx @pcalento for sharing The shifting role of the CIO http://ericb.co/iHrAdf.. Much appreciated!

[…] posts:Driving transformation with IT starts with transforming ITThe shifting role of the CIOSmall Business IT Outsourcing – don’t go too farSAIC – eating their own dog […]