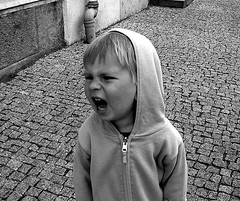 I lost my temper yesterday and a poor, helpless support representative got to hear some words that would make most folks blush.

See…when someone in a support position tells me they can’t help me, i get angry. In this particular case, what tipped me over the edge and caused a couple of expletives to roll out of my mouth was the response from the company’s support rep.

I’m sorry but that isn’t a problem I can help you with.  You’ll need to go to our website and file a ticket to get help.

Listen up  support and call center managers –  if I’m on the phone with you, I’ve done everything i could do prior to placing that phone call. I’ve read all your support material, been through your support / discussion forum and done as much research as possible.   I’ve read about the other people having the same problem…and I’ve seen your lack of response to their online requests for help.

You see…if i thought your online support system actually worked and was a viable approach, I would have tried to submit a ticket there…but with the other people having the same trouble, I figured a phone call is in order.

Now…granted…many people don’t take the time to do the research before calling support, but I do.

Regardless, if someone is on the phone with you / your support team, the last thing you should do is to tell them you can’t help them and they will need to go file a support request on your website.

Because it tells that person that they aren’t important and their problem isn’t important.

But…if that user has a valid support agreement, help them out. Please?

Rather than telling me to go to the website and file a ticket, the customer support rep could have easily opened a ticket and explained why he couldn’t help me on the phone and explained what the process would look like moving forward. That would have been helpful. I wouldn’t have gotten so angry with that approach…but instead, I was told to basically ‘go away’.

Will i continue to use this company’s product/service? Yes…but it will take a while before I pay them any more money…if i give them any more money at all. This one interaction with their support team has pushed me from being an evangelist for them to being someone that just might point people away from this company.

PS – I told a friend about this experience and she said “sounds like every phone call that I make to my IT helpdesk”.  There’s something telling in that…but that’s a post for another time 🙂

Image Credit: scream and shout By mdanys on flickr

Customer Service sucks…or….the one where Eric lost his temper….: I lost my temper yesterday and a poor, helpless… http://bit.ly/qwaLay

Eric, I feel your pain. One helpdesk procedure/process that can go along way to bridging the gap between what the call center folk can handle versus some tier 2/3 ticket based technical support team is: Have the call center rep, live, during the call, create that support ticket for the caller. Add to the call rep script something that flows like: “Mr. Brown, I am truly sorry, I am unable to help you directly with your issue thus I will need to engage one of our senior technical engineers. I’ll need to collect some additional information to get your issue… Read more »

@jfbauer Excellent point John. A much better way to handle this would have been to explain the process and create a ticket for me, share that ticket number with me and then explain the next steps and expectations. Expectations are a huge part of customer service. I used to run a technical support group supporting software used in the telecom space. The team had two main points of focus: Providing the best technical support possible and setting the appropriate expectations for the caller to help the understand what would be fixed, how to fix it and/or if it could be… Read more »

[…] one reminded me of my recent “Inconceivable” post: Customer Service sucks…or….the one where Eric lost his temper… – Eric D. […]