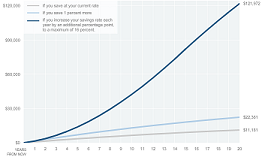 What do you think about 1%?

Its tiny isn’t it?  Minuscule even. I mean…1% of a a dollar is 1 cent. 1 measly penny.  Who cares about pennies these days?

A 1% increase in salary is a slap in the face to many employees. Most argue that they’d rather not get anything than be given a 1% raise.   For someone making $75K a year, a 1% raise equates to $750 a year which is $62.50 per month before taxes.   Not exactly a lot of money…but I’ve never seen the people complaining about their ‘small’ raise actually give that raise back either 🙂

Sure…1% of something ‘small’ is small initially, but over time, something small can grow into something big.

Let’s take a look at saving money. Let’s assume the above salary increase of 1% on $75K. Each year you get another 1% raise.  If you take your annual salary increase each year and save it and get a 1% annual return, you’ll save $11,181 over 20 years. Thats not a lot.  If you increase the savings 1% more, you end up with $22,361 after 20 years (double your money…not bad. Increase your savings 1% per year over 20 years (for a max of 16% savings) and your savings go from 11K to 120K (source). Note: in the chart below, savings are shown in today’s dollars, assuming inflation is 3 percent per year.

Take a look at this chart to see the magic of 1%:

That’s the magic and mystery of 1%.

Let’s take a step away from the savings world and look at things that are more easily understood and applied.

The Magical 1% in the Real World

Let’s take a look at an area that most of us are familiar with.

Assume you are a project manager in charge of a large enterprise software implementation.   You have a budget of $350,000 to complete this project.

You go to your project sponsor with this information and she tells you “don’t worry…what’s 1%…I never worry about this type of stuff till it gets to 5 or 10%”. Note: I’ve actually had project sponsors tell me this. Many times.

You shrug your shoulders and go about your day. You look for ways to bring in this slippage and get the project back on track. You realize that the slippage is from your project team members not giving you their full allotted time to your project.  You ask around and are told that there are other projects ‘just as important as yours’ so you’ll just have to manage your project with the resources you have.

You take your issue up the chain of command. You talk to the VP. You talk to the CIO. But…they both tell you that every project is important and you need to do what you can with what you have. Besides…they say…what’s 1% slippage really going to cause anyway…its small so don’t worry.

You resign yourself to having to pay this additional person every month you can figure out how to get more in-house hours.  So…you are seeing a 1% budgetary hit per month.

But…1% is small, right?  Nothing to worry about, right?

For the sake of argument, let’s just say that this is costing you 1% per month of your $350K budget . You are getting hit for an additional $3500 per month that you weren’t expecting to have to spend.

But its only 1% they said. Its small. But its not.

That’s the magic and mystery of 1%. Don’t ignore it because its small. Don’t overlook it due to its size. 1% is small and large at the same time.

re-imagining the roles of development, QA and operations“. The challenge of continuous delivery from an IT perspective is that it mutes the impact of improvements … but, as noted above, incremental change is “small and large at the same time.” —Paul Calento