This is a guest post by David Burkus, Editor of LeaderLab.org. David and LeaderLab has just released their new book titled The Portable Guide to Leading Organizations – jump over to LeaderLab.org and learn more. 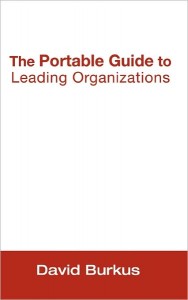 Airport bookstores are crowded with books on leadership, and each one seems to promote a “leadership lack.” They’ll each begin with phrases like “The most pressing issue in organizations is that leaders lack integrity…or empathy…or strategy…or even humor. These books continue by laying out the author’s simple framework for developing the perfect leader. On and on the dialogue goes to the point where readers become be confused because the 21 Unassailable Edicts of Leadership are different than the Seven Routines of Really Efficient Leaders.  It would be a poor move to add to this confusion. With this in mind, we will admit that we do not believe our “leadership lack” to be the most pressing issue in organizations, just the easiest to fix.

These airport leadership books provide decent advice that is easily digestible. And because it is easily digestible, leaders continue to gorge themselves on it until there is very little room left for real, solid theory. Most see theory as complex and hard to digest. When leaders think about leadership or organizational theory, they think back to the 400+ page textbook they had to buy in business school. “Seems like quite an undertaking,” leaders think. So they cheerfully hand their money to the cashier and board the plane with the latest, pocket-sized “leadership” book.

Leaders lack an understanding of leadership theory because it isn’t presented in pocket-sized form.

But leadership theory isn’t some kind of rocket surgery. Attaining a true understanding of theory isn’t difficult, if it’s presented right. We’ll survey the major leadership theories. Our intent is to present them in the same easily digestible, pocket-sized form as the airport bestsellers.

During WWII, Allied bomber losses were high, so high that the British Air Ministry undertook a rigorous analysis in hopes of finding a solution. Their engineers set out to eyeball every bomber they could, gathering data on each bullet hole. After analyzing the results, engineers decided to reinforce the areas that had the highest concentrations of holes with armor plating.

Perplexed, the engineers assumed that the extra plating had made the planes too heavy, and that the difficulty in handling the planes was offsetting the protection of the armor plating.

Wald, a mathematician, suggested that they simply put extra armor plating where the bullet holes weren’t. The idea was simple: if the planes are returning with bullet holes, obviously those areas can be struck without causing the planes to crash. The planes that weren’t returning, Wald theorized, are the ones that are getting hit in different areas. The engineers’ error was so significant, statisticians decided to name it: survivorship bias (the tendency to include only successes in statistical analysis). Any time you only examine just the successes, you will skew the results.

If we return to the airport bookstore in our minds, we see the shelves littered with survivorship bias. We love reading about successes. That’s why books by celebrity CEOs and leadership gurus are among the best sellers of any list. We’d much rather read about the brilliant company leader who started working out of his garage and ended up dominating the industry. However, when this is all we consume about leadership, we succumb to survivorship bias. While a celebrity CEO may reveal the secrets he used to climb to the top, how are we to know they work in every situation?

This is where theory comes in.

Leadership and organizational theories are constructed and tested by examining not just the successes but also the failures. Good and bad leaders, successful and failing change efforts, all get included in the analysis and the resulting theories spare us from our survivorship bias. If we want to grow into outstanding leaders, we must know how and when to utilize the knowledge provided by the existing body of leadership research.

Good leaders focus on where the bullet holes are; great leaders consider where they aren’t.

Thank you for a great article! – and all too true. As someone who has studied organizational behavior, I admit that the true theory books are a little ‘dry’ compared to the best sellers. I have one more issue with those best sellers as well. Lets call it the lack of difficult conversations. In these ‘success story’ texts, there is one paragraph stating the major change that needs to take place. Then? All is well. Rather than reading the next paragraph stating how great that change was – I would prefer to read the rest of the book detailing the… Read more »

I dislike picking up leadership books these days for this exact reason….the failure to really dig into the problems and present a true and accurate description of how difficult leadership really is.

Guest Post: The Leadership Theory Lack: This is a guest post by David Burkus, Editor of LeaderLab.org. David and… http://bit.ly/hMvw1k

What's wrong with airport bookstores? Read an excerpt from our book: http://ow.ly/1sgUOQ

Excellent observation that is so easily missed out when we focus on successes only and fail to learn from failures. Great article.

So true Shim. David really hits the nail on the head here. thanks for stopping by!

Terrific piece! I had not heard of the ‘survivorship bias’ before, and that’s a great insight.

Plus, I love that you’ve applied it to the field of leadership; an area that suffers from so much confusion that most writers don’t know whether to call it a verb or a noun.

Big contribution to thought in this one little article–well done.

Thanks Charles. I’m pretty sure leadership is a noun…but I could be suffering from survivorship bias. Glad you like the post.