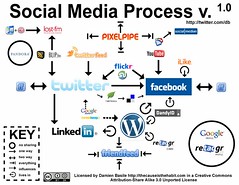 I had a conversation two weeks ago with a colleague who was taking over the social media, marketing and PR responsibilities for a small but growing organization in the consumer products industry.

In this new role, my friend will be moving into a role of responsibility of all social media and engagement aspects for the business.  While he’s excellent at marketing and pretty darn good at PR, he’s not had much experience in the social media space.  Sure…he has a Facebook and LinkedIn account but hasn’t really made much use of them for much more than just keeping in touch with old friends, family and colleagues.

He called me last week to catch up and fill me in on the new role.  After congratulating him (three or four times actually), I asked a question that I always ask in these situations…..what’s your goals for the new role?  Sure…it may be too early to really have a set of goals formed for the new role, but he had time to come up with basic thoughts as should anyone in that same position.  No need set formal goals before understanding the real issues at hand, but its definitely worth having some high level goals in mind, right?

As I knew he would, he told me of some of his plans.  While most were good, a few jumped out at me as being more tactical than strategic, which surprised me a bit…in times like this, its better to think a bit more strategic until you fully understand the new role, people and responsibilities.

I brought this to his attention.

He took a few seconds to think about my comments and then responded with something that floored me….he said something along the lines of this:

Social Media is just a bunch of tools to get my message in front of my customers…..there’s nothing strategic about it.

I’ll let you ruminate on that one for a bit.

That was my response to his comment too….perhaps it was more like “REALLY????”…but you get the idea.

Social is more than a tool

Thankfully, I know this person quite well and can speak bluntly with/to him.

I told him he was an idiot (I used that word too).

Social is not just another channel to shout your message to the masses. Social is much more than that.

Find any case study of a company successfully using social media and you find a social culture. You find people engaged in talking to, listening to and learning from their customers.

I found myself talking for a few more minutes about social not being a tool and realized I hadn’t really given him a chance to respond. His repsonse was a good one….he wanted to take some time to think about the topic and read a few of the above blogs, etc.

I received a call from him yesterday and was pleasantly surprised to hear him say:

You were right…I’ve got a lot to learn about social media.  I realized social is a culture, not a tool.

I couldn’t have said it better myself. 🙂

Sound advice via @ericdbrown Social – A Culture, not a tool http://ow.ly/3lidg #sm

Published: Social – A Culture, not a tool http://bit.ly/hwl7fA #social

One down, 6 gazillion more to go!

RT @ericdbrown: Social media is a culture, not a tool: http://bit.ly/hwl7fA

Of course, there are plenty tools using social media… 😉

I like your three-way conversation approach. A lot of times, people concentrate on the customer-company relationship, which is obviously important. But WOM is still a heckuva key part of any business, online or off, and like you say, customers will talk to each other. Maybe not directly, but definitely through tweets, blog posts, reviews, etc.

And cheers for the recommendation, mate, I’ll try not to disappoint. 🙂

That’s the quote of the year right there Danny 🙂

@dannybrown evening Danny – pointed a friend of mine over to your blog. He was impressed. story-> http://ow.ly/3lE74

So true. but only for now! >>>RT @dannybrown: RT @ericdbrown: Social media is a culture, not a tool: http://bit.ly/hwl7fA

Very well put. Social media is a culture. The usual problem is that the incumbent culture of ‘shouting the message to masses’ is so ingrained that the ‘cultural-mindshift’ requires a huge leap in thinking. I remember a recent conversation with a very senior executive who is still of the opinion that social media is something that only teenagers do.
Thanks for the article

You are right of course…it is a culture. Social requires a change in thinking that is difficult for many people who are used to the ‘mass marketing’ mentality. Its even difficult for folks that have figured out that you can’t shout your message any more…but they aren’t quite sure how to stop shouting and start talking/listening.

Spot on! Check out http://quantmleap.com/blog/2010/01/collaboration-is-an-attitude-not-a-a-tool/.

Love the article Shim! Thanks for sharing.

RT @CherylHarrison Social: A culture, not a tool http://ow.ly/3lUz2 <–This is great Cheryl thanks for sharing.

RT @cajebo: Great Article, thanks Cheryl– RT @CherylHarrison: Social: A culture, not a tool http://ow.ly/3lUz2 — I enjoyed also, so true!

Great Article, thanks Cheryl– RT @CherylHarrison: Social: A culture, not a tool http://ow.ly/3lUz2

Social – A Culture, not a tool http://pulsene.ws/xiOM

[…] posted on InfoBoom.  Reposting here for my regular readers.I recently wrote a post titled Social – A Culture, not a tool that describes a “light bulb moment” that a friend of mine had when thinking about […]

Writers: Optimizing your social media (and a question) | Chazz Writes