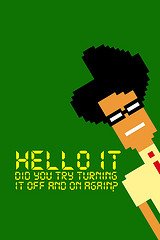 I’ve written before about the constraints that hit small businesses when it comes to IT.   Constraints are everywhere, but one area that I’ve always found them is within the space of small business and IT.

On a previous article titled Small Business CIO – Manager of Constraints, I discussed the development of options for replacing an exchange server for a client…the options were  to upgrade to a new Exchange server/license or migrate to an externally hosted Exchange or Email provided.

For that particular client, they decided to move to a hosted exchange environment and saved a good deal of money. That particular client had an IT group and had people to help support whatever option they chose…but what about the small business that doesn’t have an IT staff.

Can you run a small business today without an IT staff?  Yes…you can. I don’t think anyone would argue against that…but can you do it effectively?

Let’s take a look at an example.

There are no full time IT employees.  The owner’s son provides support as needed, but he has a full-time job and isn’t usually available when needed.

The company has a local file server to store files and to act as a backup.    A virtual private network exists between the Fort Worth office and the Dallas office so that all users are on the same network. Other than that, there isn’t much in the way of ‘sophisticated’ technology.

There are quite a number of issues at the company with the largest issues being local software problems.  A few examples of these problems:

This is a pretty accurate example of many small businesses today. They have a hodge-podge of hardware, software and technology. This hodge-podge is built as needed and, for the most part, it works.

Here’s a few thoughts on what this organization can do to future-proof itself and resolve some of their current issues.

Taking the above steps won’t solve all this company’s IT headaches, but it does alleviate them by moving responsibility for maintenance of many important systems onto someone else.

With a little forethought and planning, a small business can do just fine without a full time IT team.

One idea I recently heard about here in New Zealand is hardware-as-a-service. Small businesses pay so much per month to get a PC plus all the support services. The company doing this couples HaaS with other services, so a business could get PCs, Office 365 and other software, hosted PBX, backup and mail all for a fixed price per user per month. This works out a little more expensive that buying hardware, but effectively lifts all the technology burden from the business owner’s shoulders. I reckon it’s ideal for companies where there are no geeks – which I guess is… Read more »