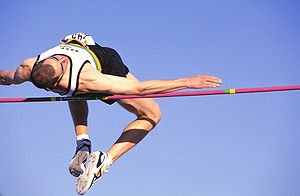 In 1968, Dick Fosbury won the Olympic Gold Medal for the High Jump. While winning the gold, Fosbury popularized the “Fosbury Flop“….a style of approaching and clearing the high jump bar that hadn’t been used previously.

Prior to the ’68 Olympic games, most high jumpers used ‘the straddle’, the ‘western roll‘ or some other style of high jump approach. Heck…some people just stood there by the high jump bar and tried to jump over the bar.

When Fosbury began competing in the High Jump, he realized the existing jumping styles weren’t suited to him so he began to experiment.  And experiment he did…he came up with a new approach to the high jump.  That new approach allowed him to win Olympic gold.  This new approach also turned out to be the dominant high jump style to be used throughout the next 40+ years.

Why all this talk of the Fosbury Flop and the high jump?

On the serious side, the story of the Fosbury Flop provides us with a nice little tale for those of us in IT.  Why?

Well…IT has been doing the sane things the same way for a long time.  During my career, I’ve constantly heard people talk about changing IT, making IT more efficient, making IT more like ‘the business’, make IT more innovative, etc etc etc.

Have we made any progress in IT? Sure we have…there are some IT groups that can be held up as shining examples of the ‘new’ IT…look at Amazon, Google and others.  The Amazon technology infrastructure is more than just an investment to be managed by IT Operations…its a revenue generating juggernaut for Amazon with some people estimate the Amazon cloud services being a $10 billion business in five years.  Now…you probably won’t turn your IT infrastructure into a billion dollar business, but what if you can add 1% to revenue for your business just from existing IT infrastructure?

So…its time for most of us in IT to come up with our own ‘fosbury flop’.

Its time for us to stop doing things the old way. Stop doing the ‘western roll’ or the ‘straddle’.  Stop standing there looking at the bar.

Start working on your Fosbury Flop today…who knows…maybe it’ll be the next big thing for you, your company and IT in general.

Great piece! I think it comes back to IT being more business focus than technology focus. There are many who like to disagree but there those few who are changing the world around them by running IT as business.

Thanks for stopping by & leaving a comment. I agree. We (IT) must become more focused on business.