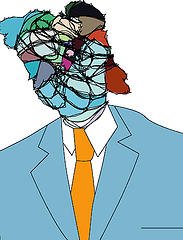 After my last post on the topic of Reinventing IT, I decided to think about the different aspects of actually reinventing IT and what it might actually look like in the ‘real world’.

I’ve talked about this subject before on this blog in posts like The diminishing role of IT and the CIO(?), Building Tomorrow’s Organization – without today’s IT? and What’s wrong with today’s IT? but I wanted to take a second to rethink the act of reinventing IT.

There’s quite a few articles out there on the interwebz about the need to reinvent IT with some dating back to 2007.

Most of these articles talk about a need to reinvent IT or re-imagine IT and most give excellent reasons for doing so. As you know, I’m all for the act of reinventing and changing IT’s focus and function.

What’s missing in most of the articles I’ve run across about reinventing IT or changing IT is the effect the business has had on IT.   You can’t really reinvent or change something unless you know the how and why behind the creation of that entity in the first place.

Why IT is what it is

I’m not going to go into a full history lesson on how IT came to be…but I do want to revisit the IT groups that I’ve worked with in the past…and I think they are representative of most IT shops.

Of all the IT groups I’ve worked with, all but 1 were setup to out-charge all work and the IT budget was set at the beginning of the year to cover maintenance and project work.  The budget ratios of maintenance to project work changed yearly but the maintenance budget grew year over year (mainly because the new projects were completed and added to the maintenance schedule / budget). The project work budget amount was set to ensure that the strategic projects of the organization were funded and could be completed in that year.

So…here we are. We have an organization that has assigned a set budget to the IT group based on strategic needs. We have an IT group that needs to out-charge their work to recover costs so their budget is met.

Let’s take a look at how this usually plays out…

Every IT group I’ve worked with has the same problem. They are asked to do some work by someone. That someone is then asked for a budget to bill the work to.  That’s the way they work…out-charge everything they can because that’s they way they are setup.

Many IT professionals will tell you that this out-charging method is necessary to control the work. They argue that its a way to prioritize what gets done.  They argue that if a person has money for a project, that project must be important enough to be funded.

But does that make sense?  Is the project really important or is it just a pet project of someone with the company?

What happens in the case where 10 people come at IT with 10 different projects and all are well-funded?  How are things prioritized then?  Project selection and portfolio management practices help in this instance but in some groups I’ve worked with, they don’t work that well.   I’m all for portfolio management in theory, but in practice, the person that screams the loudest (or has the CEO’s ear) gets their project done first.

At the end of the year, IT is ‘graded’ by their budget and their ability to get the job done.  Some of the strategic projects at the beginning of the year were completed and some weren’t.  A lot of projects were attacked but not finished.  Many projects were ‘inserted’ into the work schedule based on changing strategic objectives.

But…at the end of the year, the grades are handed out.  Sometimes IT fails. Sometimes IT over-achieves. But…most times, IT gets a barely passing grade.

Is this barely passing grade (or failing grade) due to incompetence or mismanagement? Most times its not…most times its due to changing priorities that aren’t clearly thought through and/or communicated throughout the organization.

Reinventing IT starts with rethinking the Business?

No…its because IT needs to change to help today’s business (and tomorrow’s business).  I think everyone would agree with that.

Rather than focusing strictly on the IT group, lets jump in a balloon and head up to the 30,000 foot level (make sure you take your oxygen mask!).

A lot of the problems with today’s IT can be traced back to the ‘business’.

The business sets the IT budget.

The business sets the strategic goals of the organization (hopefully with the CIO and IT groups input).

The business provides budget to non-IT groups for technology projects (again…hopefully with input from the CIO/IT group).

The IT group takes its orders from the business.

So…why are we just talking about reinventing IT? It might be time to reinvent the entire business.

Maybe its time to rethink how budgets are assigned and projects selected.

Maybe its time to rethink how strategic planning is done.

Maybe its time to rethink the business as a whole.

Reinventing IT might mean rethinking the Business http://ht.ly/3WQsN #CIO #IT

RT @neiljpearce: Reinventing IT might mean rethinking the Business http://ht.ly/3WQsN #CIO #IT

Reinventing IT might mean rethinking the Business http://restwrx.com/e1UfxB via @EricDBrown

Published: Reinventing IT might mean rethinking the Business http://bit.ly/gHwab3 #CIO

[email protected] Reinventing IT… rethinking the Business http://bit.ly/gHwab3 #CIO > Why does IT exist? http://ow.ly/3WTm5 #mdm

Reinventing IT might mean rethinking the Business: Daily Pic 25: Reinvent yourself By DailyPic on FlickrAfter my… http://bit.ly/fixN2W

Reading > RT @ericdbrown: Reinventing IT might mean rethinking the Business http://bit.ly/gHwab3 #IT

"@ericdbrown: Reinventing IT might mean rethinking the Business http://t.co/WeaQN5H #CIO"

RT @neiljpearce: Reinventing IT might mean rethinking the Business http://ht.ly/3WQsN #CIO #IT

Rethinking the Business – Root cause analysis almost always points to bad business practices, processes or inefficiencies. Many of which are challenging to even think of how to solve/tackle. However this is the real way to improve the world of technology, and the IT group within business.

What’s awesome about this is that there are soooo many people who are writing and focusing on this very topic. I have been spending the last several months just trying to categorize and find all those thought leaders, influences and emerging models, systems, and technologies. 🙂

It is an exciting topic. There are lots of really great people thinking about this topic and the future looks interesting.