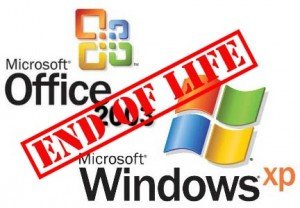 Are you still running Windows XP in your organization? Did you realize support has ended for the operating system?

Hopefully by now, you’ve heard or read that Windows XP has been set to end-of-life by Microsoft. As of April 8th, 2014 support and security updates are no longer available.

To be perfectly honest, I’m surprised the end-of-life for XP wasn’t much sooner. This is a software product that is 12 years old. Off the top of my head, I can’t think of any other product that has been fully supported for as long as Windows XP has.

When a product is set to end-of-life like this, it no longer receives any form of updates. While the operating system will continue to work, the chance that a security issue or other vulnerability will be exploited by nefarious hackers grows exponentially the further in time we go from the end-of-life date.

I suspect that many large organizations have already migrated their machines to Windows 7 or Windows 8 prior to the end-of-life of XP. At least, I really hope they have. You notice that I said “large organizations” there right? This type of migration is something that most large and medium sized businesses have been able to plan for and accomplish with their IT budget.

But – what about the small businesses out there that are limping along with no IT department and no real IT budget? Have these SMB’s migrated off of Windows XP? Do they have the budget to move users from XP to another operating system?

I know some SMB’s that are still running Windows XP. They haven’t migrated to another operating system for many reasons, but most will say it is because XP does what they need it to do. Additionally, many have told me they just don’t need (or want) to buy a new computer, which would get them migrated by way of upgrading.

One owner I spoke with knows this is something he could have avoided if he’d have a bit of thought into it last year, but he only thought that there wouldn’t be anything to worry about. He truly believed Microsoft would extend the life of XP for another year.

These small business owners are now worried about the safety and security of their computers but they haven’t budgeted for new operating systems or new computers for this year. The option to upgrade the operating system isn’t an option for most due to very old computer hardware so the only real option for many SMB’s is to buy new hardware.
Again, this may not be that big of an issue for larger organizations, but for small business owners having trouble making ends meet, a large spend for new computers isn’t something many have planned for.

For these small businesses – and any other business not prepared for the ‘death of XP’, there’s going to be a few risky weeks, months or years coming until they are able to upgrade to a new operating system.

How well has your organization prepared for the Windows XP end-of-life? Have you migrated your organization already or are you like some of my small business friends who are struggling with finding a way to upgrade?