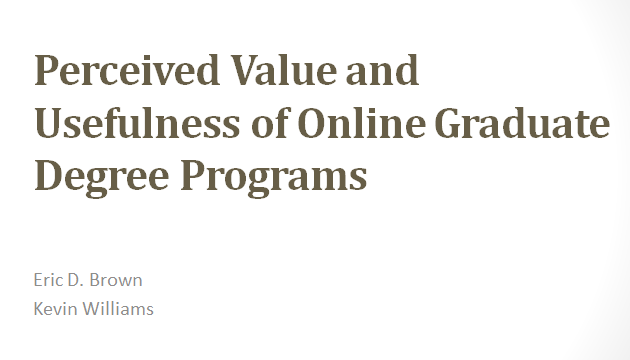 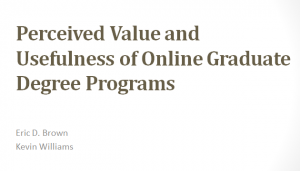 Two weeks ago my colleague Kevin Williams and I had the pleasure of presenting a short research survey to the Northeast Texas Consortium Summer Distance Education Conference in Tyler Texas. I mentioned this briefly in my post titled The Future of Education is Online.

The research project was undertaken to try to get a feel for how people perceive online graduate degrees.  Our initial approach to the survey was to attempt to understand and compare the perceptions of people who’ve earned graduate degrees online versus those that have earned them via the ‘traditional’ method of attending classes on campus.

The presentation, titled “Perceived Value and Usefulness of Online Graduate Degree Programs” seemed to be well received by those that attended our session.    You can view the slides from the presentation below or jump over to Slideshare to view/download the slides.  My apologies to all those out there who hate powerpoint as much as I do. 🙂

To perform the survey, Kevin and I created a survey on SurveyMonkey.com and asked our colleagues and acquaintances to help spread the word.  We shared the survey link on twitter and facebook and asked our friends to do the same.

I won’t go through the actual questions here (you can see them in the slides) but some of the results are worth noting:

You can see more results in the slides.

During the presentation, we wanted to get some discussion started with the attendees around the results and distance education in general. We were in luck…the group had a lot of things to say about the topic and our survey.

From the standpoint of the attendees, distance education (aka online education) is the future of higher education. There were plenty of attendees telling us that their universities and colleges had begun to transition many courses and programs to be offered either as a hybrid delivery method (e.g., a combination of an online & in-class) and/or as fully online delivery.

Additionally, these university and college administrators and professors were confidant that the next few years would see even more programs and courses transition online – since that’s what the traditional and non-traditional students are demanding.

There are more avenues for research that came out of the discussions at the conference.

Kevin and I are planning on working up this survey into a paper as well as diving into more research in the area in the near future.

Perceptions of Online Graduate Degrees: Two weeks ago my colleague Kevin Williams and I had the pleasure of pres… http://bit.ly/jlanG3

Having taken online college courses, I feel as if I can give you my perception on them: they are generally more difficult. Which seems perplexing, doesn’t it? The difficulty is in the fact that there are more essays and, generally, more work to be done than in a traditional course.

(I actually find them easier because they’re essays, but I know that many people have trouble.)