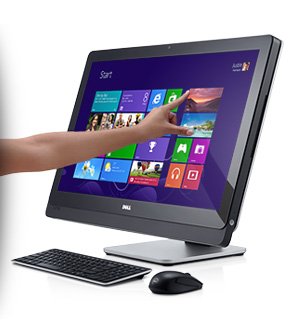 Are you ready for more touch screens in the enterprise?

Windows 8 is an operating system built for touch.  Whether its running on a PC, tablet or phone, its been designed around the touch being the main form of interaction.

We already use touch screens regularly with our phones and tablets but how would they work as your own form of computing?

Personally, I don’t see it working for me but thats because of what i do and how I do it. A touch screen isn’t ideal for me…at least in current technological forms. That said, could touchscreens become even more common place in organizations?

There are plenty of companies betting that the answer is yes.

Dell has released a few new products to take advantage of the new Windows 8 touch capabilities.  Of course they have a tablet in the XPS 10 Tablet but there’s also an ultrabook version with the XPS 12 Ultrabook.   Both of these devices are form factors that we are all quite used to seeing and using and are both excellent platforms for a touch screen OS.

In addition, the touch screen technology has also been added to a few of Dell’s “all in one” PC’s with the Inspiron 23 All in One computer.    This (and others like it) is the machine that is vying to replace your desktop…but can it?

Sure you can use a mouse and keyboard with it…and most probably will…but will the touch features be used widely in business?     At home, I can see a touch screen PC becoming something that is used often as it morphs into a part of the living room as a media player, etc…but at work I’m not sure i see touch becoming the main interaction method with PC’s, especially for those employees that are heavy users of analytic’s and word processing tools (e.g., Word, Excel, databases, etc).

That said, I’m looking forward to seeing how Windows 8, an operating system designed for touch, works for non-touch PC’s and environments.  Is there enough of functionality and features for those folks who aren’t interested in using a touch-based PC on the desktop?

From what I can see, Windows 8 can ‘transition’ to a non-touch PC fairly easily by moving away from the new ‘grid’ and back into a Windows 7 like environment.  In my research and demo’s of Windows 8 devices, I’ve not  run across any issues using a non-touch device with this touch-centric OS, but I haven’t been using a Windows 8 product as my sole platform either.

Back to the original question…will this touch-centric OS mean more touch screen’s in the enterprise? I think it will. I think many people and organizations will be migrating to Windows 8, and as part of that migration, touch-screen tablets and laptops will most likely start to trickle into the organization. I see those two platforms (tablets and laptops) as being the most used in organizations

What does more touch screens mean for the IT group?  It mean that there will be new training required as well as new approaches to support Windows 8.  That aside, I don’t see there being any additional undue burden on IT support staff from Windows 8’s touch screen approach – the biggest support issue will be just supporting a new OS, regardless of whether touch is involved.

Touch won’t take over the enterprise…yet. Heavy users of word processing, email and spreadsheets (the majority of business users) won’t be able to replace their physical keyboards. That said, we are going to see more touch devices in tablets, ultrabooks and phones.

Are you ready for more touch devices in your organization? They are coming.

[…] Eric Brown asks: Are your ready for more touch screens in the enterprise? […]

[…] Eric Brown asks: Are you ready for more touch screens in the enterprise? […]