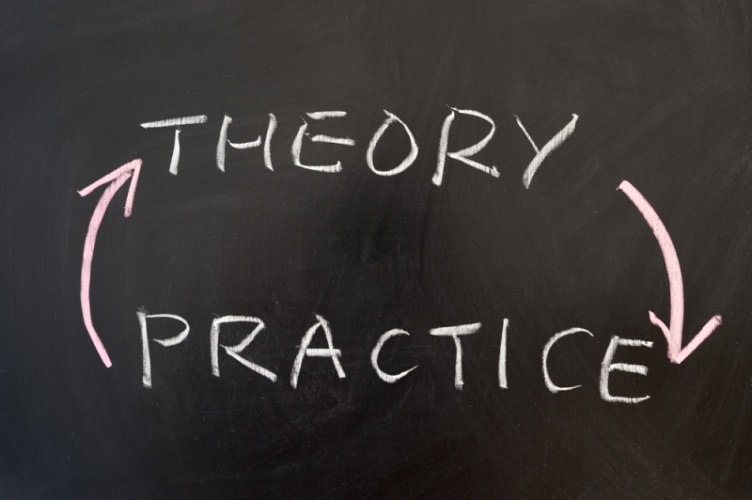 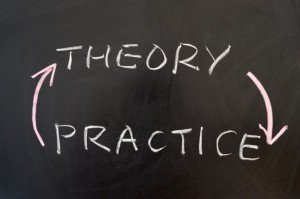 This won’t surprise many people (at least I hope it doesn’t)…there is a huge difference between “theory” and “practice”.

I’m an academic AND and practitioner. I have a Doctorate in Information Systems and have worked in aspects of IT / IS for almost 20 years now.  Theory is great at preparing people for doing things in the real world, but many times theory is just that…theory.

For example,  back in 2006, I earned the Project Management Institute’s (PMI) Project Management Professional (PMP) certification. Prior to earning the certification, I had been managing projects for a number of years and was absolutely floored by the PMP study material and the ‘theory’ behind managing projects.  Sure, much of this theory is useful in some manner but much of it isn’t practicable in many projects I worked on over the years.  I didn’t renew my PMP certification when it expired because I didn’t see the value in having those particular letters after my name. Also, don’t get me started on companies that will only consider hiring Project Manager’s with the PMP certification.  The PMP cert is a great example of ‘theory vs practice’….just because you know the theory behind project management doesn’t mean you can actually manage a project.

Another example can be found from my background.  I earned a Master of Science in Electrical Engineering (MSEE) from Oklahoma State University with a specialization in Wireless Telecommunications.   While working on my degree, I learned a lot of theory about wireless telecom and how to design systems.  I also learned a lot of other stuff related to Control Systems, Electrical Engineering, Neural Networks, Stochastics, Signal Processing and other  interesting (and difficult) stuff. I learned a lot of theory about how things work. I learned how to calculate things and design things…in theory.

When I got out in the real-world, I realized the theory was useful but not ideal. I didn’t have any real knowledge about how to actually DO anything useful. At the time, I couldn’t tell you how to add a new tower into a CDMA network or do PN planning for that tower/network. I couldn’t tell you which antenna was best for a scenario. Sure, I knew the difference between an omni antenna and a directional antenna but the real-world use cases of antenna types was unknown to me.

Another example can be found with my doctorate work. When I was looking for a topic for my dissertation I was told by many people to just ‘pick something because you’ll never revisit the work’. That was terrible advice for me…if I was going to spend time working on something, I wanted to get some value from it.   So…I chose to look at combining my interest in the financial markets with my interest in social media and sentiment analysis. This led to my dissertation titled “Analysis of Twitter Messages for Sentiment and Insight for use in Stock Market Decision Making.”

While my dissertation is very academic, I made sure to spend time on real-world application of the theory and developed Trade The Sentiment. I wanted to make sure that theory met practice.

Making sure theory meets practice is a difficult thing to do for some but easy for others. I think there’s probably some study out there that shows that some people are more prone to theoretical pursuits versus hands-on pursuits (and vice versa). That said, to be able to get things ‘just right’, you need to find a way to link up theory and practice.

We always read about those companies and people who are ‘great’ at what they do. There are tons of books on the subject of how to become ‘great’ (e.g., Good to Great, etc) and many of these books tell you to ‘do X and you’ll be great’. It’s never as simple as following a recipe but I can say that the companies and people that I know that are really good at what they do are able to make theory and practice mesh well together.

For example, one of the best project managers I know is a PMP and has been managing projects and programs for many years. She knows PMI’s “body of knowledge” and project management better than anyone I know (except for maybe Glen Alleman) but she also knows how to apply that theory to each project. She knows what things to skip and what things to focus on while managing projects and she knows that each project is different and requires different management styles.   Her projects are generally on-time and on/under-budget and she rarely throws PMP ‘theory’ around while successfully managing these projects.

Merging theory and practice can be difficult and often takes considerable experience to be able to do successfully.   What tips do you have to make theory meet practice?