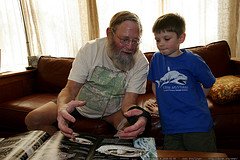 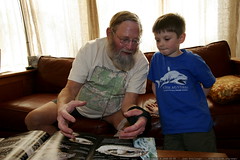 I’ve watched many of the No Reservations episodes and have always come away from each show with some new-found piece of of knowledge and/or appreciation about a new part of the world.   Anthony does great work on No Reservations.

The episode last night was different than usual.  The episode, titled “Into the Fire“, places Bourdain back on the cooking ‘line’ in his old kitchen as a cook.  No longer is Tony the ‘Executive Chef’…he’s a line cook responsible for delivering many (many) dishes throughout the lunch and dinner shifts.

Throughout the episode, Bourdain is able to keep up but you can tell he’s not quite up to par as he was when he was a younger chef working the line.  It was obvious that he was out of practice as he was scrambling around trying to find ingredients and pans and trying to remember what orders he had ready or not ready.

It was an excellent episode.

For one, it showed just how tough it really is to be a line cook.

But even more importantly, to me, was the fact that Bourdain, a well-respected chef, author and TV personality, had trouble doing a job that he used to be able to do extremely well (according to him).

Now….given enough time, I’m sure Bourdain could get back up to speed as a line cook but the point is – he couldn’t just waltz in after years of not being a line cook and be a good line cook.

But…he stepped off the line years ago to be an Executive Chef. He’s been making menus, ensuring there are enough supplies to run the restaurant, etc etc.  He’s even stepped away from that job lately and has been a TV star and author.

So…what made him think he could step into the line and be a cook again? I’m sure part of it was for TV…and it made a really good TV show.  But…I wonder if he thought that he really could step in and be as good as he used to be?

That said…if Tony stepped into any kitchen in the world and told the line cooks how to do their jobs better, wouldn’t those line cooks listen?  I’m sure some would see him as some ‘old dude’ and not pay attention, but the smart cooks will pay attention and try to learn from that ‘old’ dude.

Regardless of whether Bourdain can still cut it as a line cook, he’s still someone worth listening to, no?  He still has a great deal of experience and can provide some great insights that might help a young line cook in their career.

So what’s the takeaway from my rambling?

How many times have you been in a meeting and the CEO, CIO, VP or even a senior IT professional try to step into your role and tell you ‘how things should be done’?

In many instances, I see eyes role or glaze over. I see the ‘young’ IT professionals snicker and joke around about how things are different now in 2011 (or whatever year it is).  Maybe there’s an age different between you and the CIO or older IT pro’s, but they’ve been in your role and have seen most of the things you’ve seen.

Learning from those who ‘did’ or ‘used to do’ is important.

Just because someone isn’t doing a role any more doesn’t mean they aren’t worth learning from.

Good lesson here: Learning from those who ‘did’ | Eric D. Brown http://t.co/ujxFAwF #pmot

Learning from those who ‘did’: Last night, I watched Anthony Bourdain’s No Reservations show on the Travel Chann… http://t.co/ebbDZll

Published: Learning from those who 'did' http://t.co/AkPstSL

Published: Learning from those who 'did' http://t.co/AkPstSL