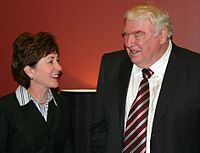 Apparently John Madden has announced his retirement…I’ve been so busy with work and school to not know this.  Baldoni took Madden’s announcement as a chance to look at what leadership lessons can be learned from Madden….and I was impressed.

Now…I’m going to make you jump over to the article to get Baldoni’s take on these lessons but I will provide my own commentary here too.

I don’t think anyone would argue with these points.  Leaders need to be committed towhat they do, love what they do, innovate and know when to throw in the towel.  But what about the third one (tell stories)?  Do many leaders do that?

I think they should.

Think about John Madden’s commentary during football games (American football that is).  He never sat there and just called the plays as they happened…he provided insight into what was happening and share stories from his many years of experience.

He used stories to educate people watching the games and he made people smarter by doing so.  This is what leaders need to do to.

Don’t just tell people that the organization is changing…tell them why its changing. Tell a story that highlights the reasons for the change.  Provide examples and a narrative to help people take the information in and internalize it.

In addition to football jargon, let’s learn something else from John Madden. Describe where you want to go and draw it out for your team….you may be surprised that people will be on-board with your vision if they understand it more clearly.

Nice post. I really enjoyed the "lessons." The ones listed are very true and are keys to success.

Inspiring post Eric. When you read Madden's lessons, they seem really obvious, but executing them is what is important. Madden has shown he can execute where countless others fail. Thanks for sharing.

great post, i liked john madden, he may have been a little redundant from time to time, but everyone always talked about him, and he did know how to do those "lessons" very well. it really is pretty simple and he made his living doing it his way.

redundancy: I feel like I'm being redundant in the classroom every now and then… but there's something useful in good teaching about saying the same thing a couple-three times, and saying it different ways, to make sure people get it. Some folks get the stats, some get the stories… but by the end of the show, you hope everybody gets it. Madden was a good teacher in that regard: he'd show the numbers, then he'd wrap stories around them. And yeah, people talked about him and what he said. That means he was making an impression, making it stick… which… Read more »