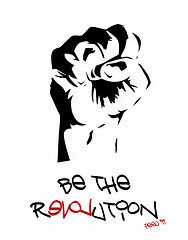 We in the IT world like to talk a lot about the ‘new’ IT, the future of IT and the the need for IT to ‘change’.

Whether that change is focused on aligning with the business, being more agile, moving to the cloud or just plain providing ‘value’ to the organization….we talk about it as a necessary activity for the survival of IT.

And we talk about it.

I’ve spent many years writing about that change and helping organizations understand the need for change.

Seth Godin wrote a nice piece today titled We say we want a revolution… where he writes:

Of course, what we say doesn’t matter so much. What we do is what matters, and we have far more influence that we’d like to confess.

But…for the most part…we still see more of the same.

Over the past few months, I’ve been talking to many of my colleagues in the IT world across many different industries and many different countries.    I’ve talked with people from all areas of IT from Senior IT Professionals, Leaders all the way to entry level IT personnel.

What I heard didn’t surprise me.

From the people in senior leadership roles, I heard that their main focus was things like:

These are all valuable and noble areas to focus.

You would think these focal points would be the same throughout IT…especially within the same companies…wouldn’t you?

I also talked to mid-level managers and IT professionals within the same organization as the senior level leadership teams…and I get a different response.

The best…most damning response?  This one:

Now…while these conversations and responses are anecdotal and non-scientific…they are a real world responses from real world IT Leaders and Professionals.

So…there seems to be a huge disconnect between the organization, IT Leadership and the IT Front-lines.

Is it that the current crop of IT Leaders don’t understand how to lead/manage?  Or…is it that the organization is asking for one thing while demanding another?

Personally, I think there are a lot of issues at play here.  But…I think Mr. Godin hits the nail on the head in most instances.   IT leadership talks the talk, but doesn’t walk the walk.

Don’t get me wrong…there are quiet a few good IT leaders / groups that are doing great things…but the majority of people I talk to fall into the ‘not so great’ camp.  I heard more responses about time being spent on ‘firedrills’ than i did about delivering something of value to the organization.

Its time to change this.  I know…there’s that word “change” again…but its time to do more than talk about it.    I don’t care of its a revolution in IT or an evolution of IT…but something needs to happen.

BTW – The good folks over at IDG and the Enterprise CIO Forum have just published a report on the need for IT to Burnish its image…perhaps there’s something worthwhile in that report that’s worth reading and touches on this topic.

What are your thoughts? Are you seeing a revolution, evolution or more of the same?

An IT Revolution, Evolution or more of the same? « Serve4Impact

happened to go over your post while browsing for IT strategies. You really made very nice points. There  is difference in “using the IT for business” or “building the business with IT”. For me the first one is what I feel doing firedrills, the 2nd one goes with a visionary leadership.  The first one is in the cadre of working for money and 2nd one is in the cadre of building organization.

The success is when each employee thinks as an entrepreneur at every level.  There will be a  alignment and  they become focused to make IT help/enable to grow business.

Thank you. I agree with you RE: The “entrepreneurial” mindset for employees. That type of thinking definitely creates a new environment within organizations.

The Changing Role of IT « Business/IT-Alignment