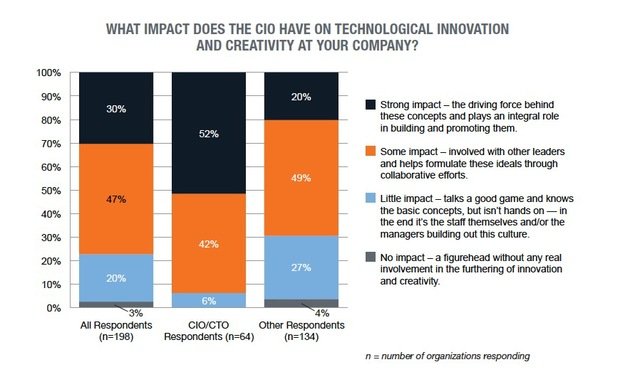 Michael Krigsman just published a piece titled “What do business people think of their CIO?” that shares some output of a research report put out by Tech Pro Research regarding the perception of the CIO within the business,  including some results related to innovation and the CIO.

I’ll leave you to go read Michael’s write-up on the subject…he does a good job pointing out the highlights.   I did want to point out one of the results from the report that discusses innovation and the CIO within organizations.  From the report:

…there is a sizeable gap of 32 percent between CIOs and non-CIOs regarding whether the role has a strong impact on technological innovation and creativity. Nearly one-third of non-CIOs feel their CIO has little or no impact, but only 6 percent of the CIOs feel they have little impact, and none feel they have no impact. The low percentages of those reporting little or no impact across both groups show a solid footprint on the part of the CIO.

This particular passage has the following chart to accompany it:

Based on these responses, it is clear that most respondents believe the CIO / CTO role is vital to innovation within the organization. That’s a good sign for the CIO/CTO role.  Jump over and read the rest of the results from Tech Pro Research and/or  Michael’s “What do business people think of their CIO?” article.