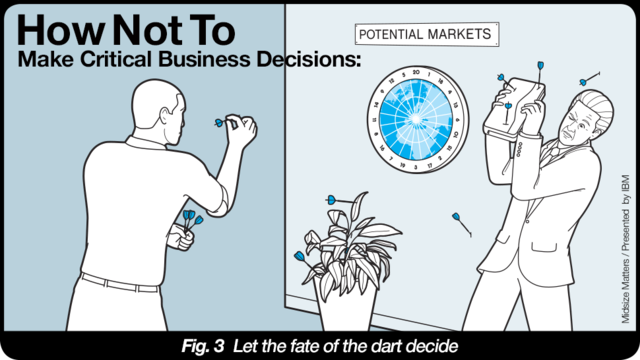 I ran across IBM’s “How NOT to run a midsize business…” site and immediately spent some time sifting through the site.

You’ve most likely seen the cards from someecards.com running around the web these days.  IBM has taken the idea of those cards and applied them to the midsize business (and business in general).  You should jump over and read through some of the posts there…there are some that are quite funny.

While skimming through the site, I noticed this one:

Now…at first blush, this is quite funny…but I’ve actually seen a similar situation at one organization I worked at.

The company was a small business that had been started by a gentleman who fancied himself a bit of a sportsman.  The company wasn’t badly run – in fact it was a well run and fairly profitable.  The one issue that caused a lot of consternation within this organization was the way in which the CEO / Owner made the “hard” decisions.

The decision making process used by this CEO was similar to the “…let the dart decide..”  in the cartoon above.    He had a few different approaches but the one he used most was a Golf Course’s Driving Range.  He would take his golf clubs to the local driving range and pick out particular areas of the range to use as ‘decision points’. This driving range is well known for having flags and targets around the range and the CEO would call out which flag/target would be for which decision.

The CEO would spend the afternoon hitting golf balls and based on his pre-determined flags/targets and some form of internal ‘counter’ to help him make decisions.   Now…I won’t say that he never made good decisions, but I will say it felt very much like throwing darts at dart board.  The decisions were at times random and at times prescient.

Regardless of the outcome of this particular CEO’s decision making process, the way in which he made these decisions was mind boggling and would drive the employees crazy.   While this CEO was able to be successful with his approach, it doesn’t make it right.

Making decisions based on dart boards, golf driving ranges or any other form of randomized approaches isn’t an ideal way to run an organization. While it may work for a while, it most likely won’t work all the time.  Don’t follow this CEO’s footsteps…unless you just like spending time at the driving range.

This post was written as part of the IBM for Midsize Business program, which provides midsize businesses with the tools, expertise and solutions they need to become engines of a smarter planet. I’ve been compensated to contribute to this program, but the opinions expressed in this post are my own and don’t necessarily represent IBM’s positions, strategies or opinions.