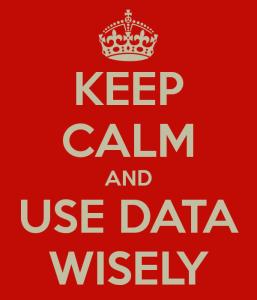 I just read Jim Harris’ recent blog post titled “Data isn’t everything“. In the post, Jim provides some quotes from an article titled “Why Quants Don’t Know Everything“.

Quants have risen to prominence in fields as diverse as sports, politics, stock trading, and dating. However, after a field has become quantified, it doesn’t become a data-driven paradise, Salmon cautioned. “The more a field is run by a system, the more that system creates incentives for everyone (employees, customers, competitors) to change their behavior in perverse ways, providing more of whatever the system is designed to measure and produce, whether that actually creates any value or not.”

There’s an old saying that goes something like “you get what you measure for” and we’ve all seen it happen time and time again throughout all sorts of businesses.

Sales people are measured (and paid) based on revenue, so they bring in revenue.  Customer service representatives are measured (and paid) based on the speed in which they finish their calls with clients.  Both are great metrics to measure but without some form of control you end up with unprofitable revenue because the sales people will do anything to make a sale and angry customers because the customer service reps are more interested in ending the call then helping the customer.

While becoming data-driven is a laudable goal, as Salmon concluded, “let’s not forget that data isn’t everything.”

That’s what a good synthesis of big data and human intuition tends to look like. As long as the humans are in control, and understand what it is they’re controlling, we’re fine. It’s when they become slaves to the numbers that trouble breaks out.

Every real problem I’ve ever seen with organizations using data has been when they take the data as ‘gospel’ without any business context and ‘instinct’ added into the data analysis. Those companies that do well with data are the ones that allow themselves to control and analyze their data based on the current context of their businesses.

Data isn’t everything, but with proper planning, thought and management data (and the analysis of that data) can deliver real, long-term value to your business.  Don’t let your data drive you…drive your data.