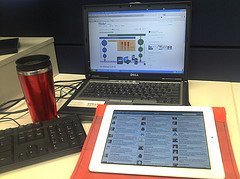 The Bring Your Own Device (BYOD) discussions continue to occur across most organizations.

While most BYOD discussions revolve around security practices,some really good conversations are beginning around the use of virtualization techniques to allow BYOD to flourish while keeping a tight control over security and data.

I recently spoke with the CIO of a small organization who undertook an office-wide virtualization project. The project was not started strictly for BYOD assistance but the IT group quickly realized they would be able to manage BYOD issues much more easily with virtualization.

Rather than roll-out new desktop hardware to the organization as planned, the CIO had a conversation with the people within the organization. He asked if they“would you like to bring your own computer in”? The majority said they would. So the CIO did something quite interesting. He took the budget for new desktop hardware and rolled the majority of that money into his virtualization project while keeping some available for hardware refreshes for some of the employees that didn’t have their own computers or didn’t want to bring those computers in.

With this new budget, the CIO implemented a centralized system using Dell’s Virtual Desktop Infrastructure (VDI) to build out an office wide virtualization solution. Using best practices for security and management processes, he then allowed his users to begin to connect via Thin Client / Terminal Services to the server to access their ‘workspace’. This added an additional benefit to the organization as it also allowed employees to access their ‘workspace’ from home or while traveling, thereby increasing productivity.

Additionally, the IT group configured the network so that the employees could still use their own devices to access the Internet while still being connected to their virtual workspace. This allowed employees to feel a bit less ‘controlled’ because they could surf during their downtime on their own devices.

For those users that didn’t have their own computers at home (or weren’t willing to bring them in), the CIO purchased new hardware. Rather than going for the top-line hardware as he normally would have, he purchased more economical machines for most employees.  He was able to take some of that cost savings and purchase a few higher-end machines for the developers on-staff. Additionally, he picked up some dedicated thin-client devices.

The one drawback to this approach, according to the CIO, has been the increased requests for support for employee provided computers. While he and the IT group have tried to be responsive and solve whatever problems they can, they’ve had to push back a bit and ask the employees to contact the vendors they purchased their computer from.

This virtualization project has delivered a few benefits that the CIO hadn’t initially considered. For one, he saved money in the short-term and long-term by saving on desktop hardware costs and IT support costs for that desktop hardware. Additionally, the IT group was able to find savings in time and operational activities due to the centralized nature of the virtualized systems. Rather than spending time upgrading software and hardware on multiple computers and in multiple locations, IT staff was now able to maintain just one set of applications and one main server.

The initial outlay of capital for the VDI approach was significant, but the CIO was able to show his board that the initial investment would pay for itself many times over in cost savings from IT support and savings from not purchasing new desktop hardware.

This roll-out is about a year into its existence and so far it has been working well. Most employees are happy with their ability to bring their own device – whether that device is a Mac, Windows or Linux laptop or a tablet of their choice.

While virtualization may not be the only answer for the BYOD challenges, its one approach that worked for one organization and continues to work for them.

Image Credit: byod (Taken with my android…) on flickr

This is a paid post in conjunction with IDG, Dell and Intel®.