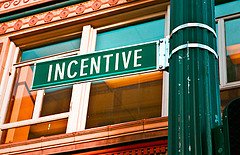 Its a story about how an approach to “incentivizing” professionals turned a highly functioning team into a team focused on ‘checking boxes’ and functioning as a group of individuals rather than a team. This is a true story…and happens more than most of us really want to admit.

The team at the heart of this story is one that was built over 10 years. The team was made up of you, very smart, dedicated professionals.

This team’s main focus was and is to deliver technology consulting services to a client base spread over the United States.  Clients included every size of business from Fortune 500 to mom and pop shops.

The team was small…only about 10 people in total.  Though small, the team was efficient and very very good.

The annual revenue from this small team averaged about $15 million.  $1.5 million per team-member.  Not bad, no?

This team worked together for years as a real team. Each person would help others as needed. There was very little ego, and a great deal of team-work.

The team was successful for three reasons: good people, teamwork and good leadership.

The owner of the consulting company had been looking to sell for a while and received an offer he couldn’t really refuse. Most of the team members knew this day would come eventually. They knew the owner was looking to sell and that, eventually, change would come along.

The acquiring company was a huge multi-national consulting company.   Their reasoning for picking up this small consulting company was simple…they wanted the revenue.  They also said they wanted the ‘people’, and by all accounts, everyone felt welcome and comfortable in their new roles.  While comfortable, the members of this team had to deal with some real change…anytime you move from a small organization to a much much larger organization, you are going to have some change to deal with.

For the most part, the acquiring company did a good job pulling the consulting team into their organization. Salaries remained the same. Titles were changed, which caused some real consternation but everyone was able to live with their new role.

As part of the compensation package, the large multi-national made a change to the bonus structure of each of the new employees.

Rather than be paid a year-end bonus based on overall company performance, the companies’ “standard” bonus structure for consultants was implemented. This new bonus structure consisted of the following:

Everyone was ecstatic when they heard about their new bonus structure.  Quarterly bonus AND based on individual performance….perfect! 🙂  In addition, this new team was going to be a new consulting practice for this multi-national…so there was a ton of room for growth.

But…there’s an underlying danger here. This new bonus structure is heavily weighted toward individual ‘goals’ and incentives each person to meet the next ‘toll-gate’.

Before we continue, let me explain these ‘toll-gates’.   These aren’t ‘strategic’ initiatives or goals. They aren’t things that will help the company in the long-term. They are tactical.  These toll-gates are important for each individual project…but they are still tactical.  They help deliver on each project, which delivers revenue to the organization, but they are narrow in focus.   When a consultant gets a project plan signed off by stakeholders, they get a ‘check’ in the ‘project plan’ checkbox and are assigned a percentage of their bonus based on that toll-gate being reached.

The toll-gate idea is a good one to ensure proper project methodologies, but a poor approach to use as the underlying basis for the largest portion of an employee’s bonus.

Every employee of the consulting group loved  this bonus structure. They went to work and did their job AND  were paid EXTRA just to do the basic steps necessary to do their job.

Who wouldn’t love to receive a bonus just for doing their job, right?

But…this approach has a drawback.This approach conditions people to focus on themselves. Each employee is focused on their ‘toll-gate’…and only their toll-gates.   While the toll-gate approach didn’t stifle teamwork per se, the focus on individual tactical goals did.

After six months with their new employer, each of the original team small business employees where doing well and were quite happy.  They were being paid more and working less than they were before they were acquired. They were doing everything they were asked to do…toll-gates were met and check boxes were checked.  Who wouldn’t be happy, right?

There was a problem though. Revenue of the new consultant practice was down. Margins were down.  New business was down.  All the measures of  ‘efficiency’, growth and project ‘goals’ were moving down as well.

Nobody could understand it.

The best people were on the team. They had great clients. They provided great service. But…revenue was heading lower.

After a year of this decline, the leadership team decided to do a ‘deep dive’ into the issues to better understand what was happening.

What they found was the following:

Before I get to the lessons…this isn’t a “big company buys small company and screws up” story.   There really isn’t any major player to point the finger at here…but there is a mindset to blame.

Incentives are good. People like to be recognized for their efforts. But…you’ve got to make sure you are incentivizing the ‘right’ things. And…those ‘right’ things are different for each company, each group and even each team.

For the team discussed in this story, the ‘right’ approach to incentives was one that rewarded the team members for bigger, more strategic goals.

Before being bought, they were rewarded solely based on how the organization did…therefore, they were incentivized to go out and drum up new business, deliver on existing business and do whatever made sense for the business as a whole.

Now…as professionals, you’d expect them to do that anyway…but if they aren’t incentivized to do so and are fully busy delivering on their ‘toll-gates’ to ensure they get their bonus, you can’t really blame the people…they were doing what they were being measured on and paid for.

Have you thought about your incentive plans for your teams lately? Are they setup to deliver the most bang for the buck? Are they aligned with your organizations strategic goals?

As IT professionals and leaders, we haven’t always had much say in how bonus plans are built and delivered…but in addition to the many other things on our plates, this is just one more very important aspect to a leaders job.  You’ve got to make sure you are measuring and rewarding the right behavior.  If you want efficiency, don’t measure things that aren’t drivers of efficiency. If you want business development, measure and reward business development.