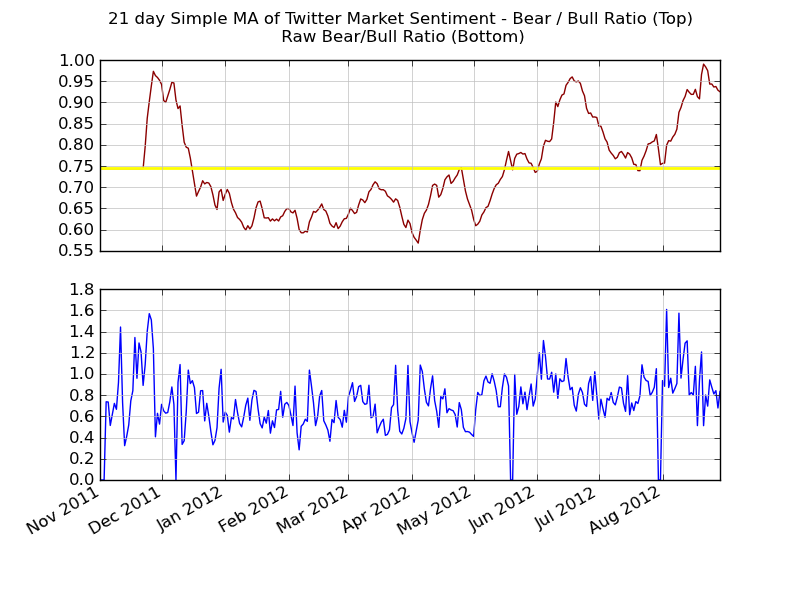 If you’ve been following me for more than a few months, you probably know that I’m researching Twitter Sentiment related to the market for my doctoral dissertation.

A few previous posts on the topic:

Last week, I published a quick update via a photo on twitpic to show a few friends and received quite a lot of feedback and response on that chart. 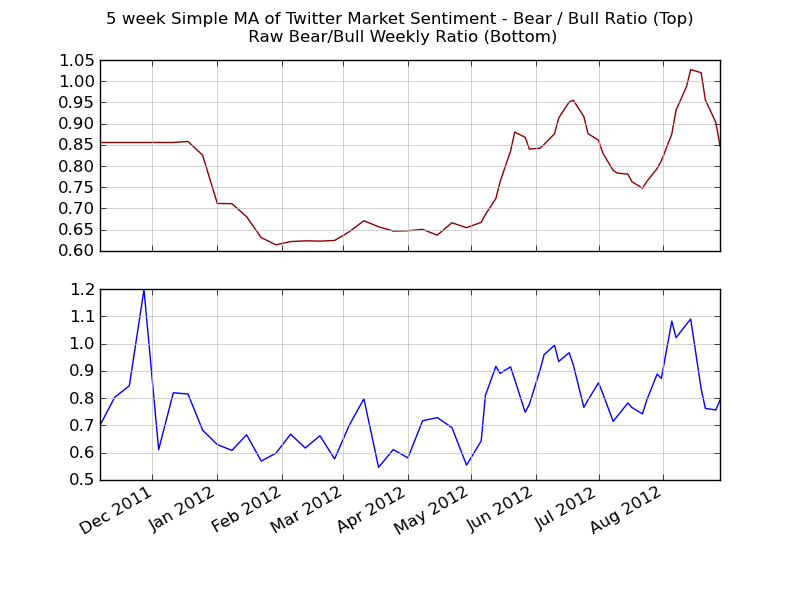 The question is, is the sentiment useful for understanding future market direction…or is it something that is ‘created’ by market movement.  That’s part of the research that I’m doing now.  I’m working on researching if there is any correlation / causation between twitter sentiment and price movement.  My gut tells me that there is correlation and the data points to this…but is twitter sentiment leading or lagging the market?  That’s the question (at least on of them that I have).

One of the things that has bothered me since day 1 of this research is whether the sentiment found via my twitter collection / analysis engine is ‘accurate’.   My analysis is only as accurate as my training data set…and right now, my training dataset shows an accuracy of ~90% using the Python Natural Language Toolkit’s accuracy measures.  So..I feel good there.

But…I wanted to look at comparing my Bear / Bull Sentiment Ratio with other sentiment measures to get a feel for how it might measure up.

I had a moment of brilliance yesterday.   Well…not really brilliance…more like a random thought. But…who’s to say brilliance isn’t really just randomness in the universe 🙂

I decided to compare twitter sentiment to the American Association of Individual Investors (AAII) Sentiment survey data that they release every week.

The latest AAII Sentiment Survey is shown below. I’ve taken the data from the latest survey spreadsheet and created a similar ratio to what I am using (I divide the bearish sentiment by the bullish sentiment). 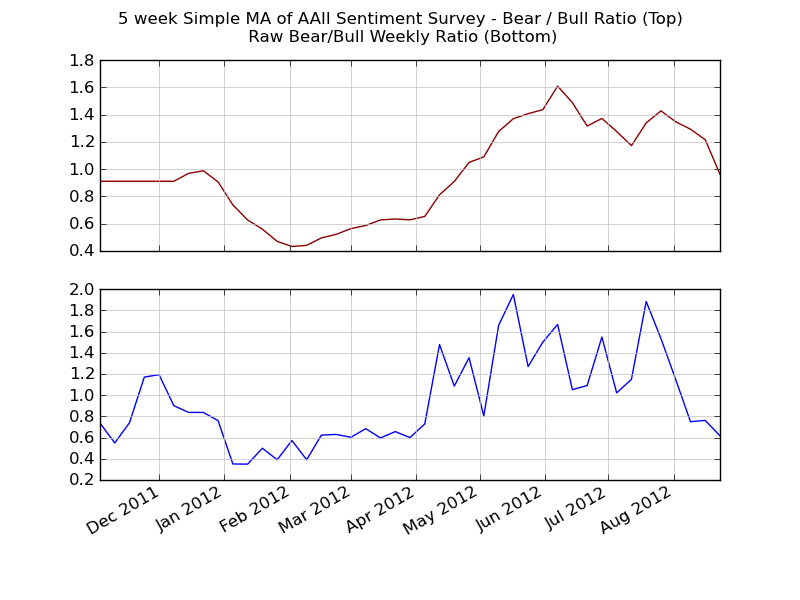 Taking the AAII data and my Weekly Twitter Sentiment Bear/Bull data, I did a quick comparison between the two.  While the extremes are different, the data  generally follows similar patterns. 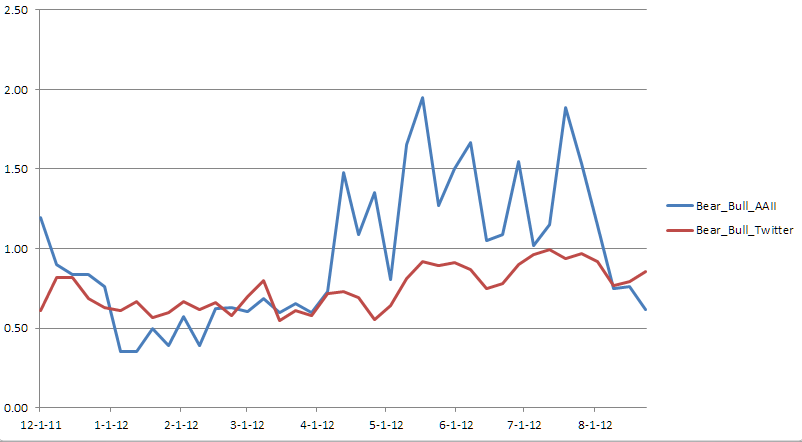 Not bad. The levels of the Bear/Bull ratio are different and more pronounced in the AAII survey, but the overall ‘direction’ is similar.

I feel good about this.  AAII reaches out to professional money managers for their sentiment survey…I’m watching Twitter to gather sentiment from people who are talking about the market.  While the data points are exact matches, the directional bias seems to be close.

Look for more on this in the future.

Brilliant intersection of disciplines here Eric. You can try adding PUT/CALL ratios, $NYAD, and $NYHL and a 21 sma on them to keep it uniform.

I’ve been thinking about how to incorporate other ‘sentiment’ measures (put/call, etc) to see how they stack up.

Someone told me that data is no good if you can’t interpret it correctly. I think, there are lots of missing links where twitter sentiment is concerned because some unscrupulous folks do find ways to game the system.. You can’t really know the intention why someone tweets or retweets – sometimes, it’s mostly random, like retweeting tweets from influencers in an effort to get noticed/followed. Then, we see those that look like a product brochure tweeting. It’s not really easy coming up with an almost accurate analysis.

Hello seventhman – Sure…people are going to game the system. Everyone always does. But.. that’s why you don’t rely on just a few tweets and a few users. The data you see above is based on over 1.5 million twitter messages from people specifically talking about the market. Are there twitter messages in there from people trying to ‘game’ the system? Yes. Does it matter? Only if the majority of people are gaming the system…which in my research, I’ve found isn’t the case. If I were looking at 50 or 100 messages, I might be worried about this issue. But… Read more »

Very interesting Eric; keep pushing on this, I do think this is one of those wisdom of crowds things where the whole is probably a lot more than the sum of the parts. Good work!

Thanks for sharing your progress. Very interesting.

Thanks John. Hope you are well.