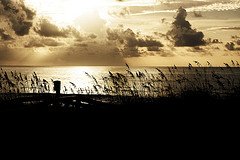 Christian Verstraete, HP’s Chief Technologist for the Cloud, wrote a nice piece over on the Enterprise CIO Forum
titled Cloud, Evolution or Revolution? In that post, Mr. Verstraete asks the basic question – is “cloud computing is a revolution, a paradigm shift, or not“.

The post is a good read…worth your time to jump over.

While Mr. Verstraet never really answers the question in clear terms, my answer to the question – is cloud computing an evolution or a revolution – is ‘yes’.

Evolutionary because, in many ways, the move to cloud computing is just another stage in the evolution of IT.  We’ve moved from mainframes to servers to virtual servers and now to the ‘cloud’…which, in many organizations’ is seen as just a way to outsource non-core functions.

Cloud Computing is also revolutionary for the organization.  Revolutionary in the sense that there’s no longer a need to spend thousands or hundreds of thousands of dollars on hardware to get a website and/or product running.  Rather than building up an IT operations team and a development team, you can let the operations be managed for you by a cloud vendor.    There’s cost savings there that haven’t been available in years past to the small to medium sized business.

So…cloud computing is both evolutionary and revolutionary.  There’s tons of debate in the IT world about whether the cloud is the future…but that’s the wrong debate.

Mr. Verstraete closes his argument with a similar one.  He writes:

It probably makes sense for an IT department to review their applications and identify the ones that clearly differentiate the company from its competitors. The question then has to be asked whether the non-differentiating applications should continue to be ran from the enterprise datacenter or should migrate to SaaS type delivery.

I started to comment but felt I needed my own blog post to respond. Evolution? Yes. Revolution? … I’m not totally convinced and posted an article in response on my blog here: http://bit.ly/iTmvza

And IT better hurry up.

“The cruel truth about the easy-to-use, business-enabled Web 2.0 is that it allows customers – both external and internal – to vote with their feet.”

Cloud: Evolution or revolution? Regardless, cloud is an enterprise inevitability. Commodity technologies. Consumption-based costing. Emphasis on results over how you get there.

As for debates, I’m intrigued by another … whether the cloud is a version of outsourcing (or not) – http://bit.ly/iWZupT – given the implications on partners, billing and management. We’ll probably end up with the same answer as the evolution vs. revolution issue – YES.

(note: I work on projects sponsored by Enterprise CIO Forum and HP)