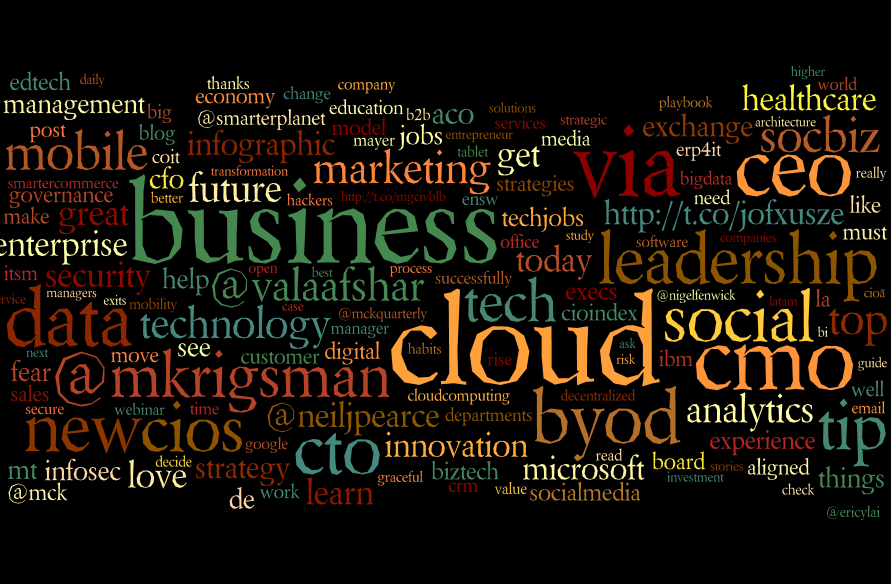 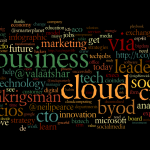 On Monday July 16, I started saving all tweets with the hashtag “#CIO” using twitter’s API. I’m using the same collection/storage script that I’m using for my Twitter Sentiment for Investing Decisions research and just added another keyword term to store.

Since I have the ability to capture,store and analyze twitter data, I thought I’d point it at one of the areas that is most interesting to me…the CIO role.

The collector started capturing data around 8AM on Monday July 16.

At 8AM today (July 18), I grabbed the captured tweets to take a look at what people are talking about.

There were 1089 tweets collected during this time. Per my standard process, I removed common English Words and the terms “RT” and “CIO” as these two words were the most used words in the captured tweets and added little value to have them included (the term  CIO was used 1104 times and RT was used 356 times).

To get a good visualization of the words found, I used Wordle to and it gave me the following (you can view the visualization on Wordle or click the image below to jump to Wordle):

Stay tuned…I’m planning on keeping on eye on this over the next few weeks/months to get a feel for what type of content is coming across this stream and if there’s any type of analysis that can be done to understand this content better.

Eric – interesting, but the most popular words are not surprising. Look forward to your further analysis.

I agree….the words aren’t a surprise at all. Check back in a few weeks when I have more content to analyze.

[…] As I mentioned a few weeks ago, I’ve been capturing and analyzing the #CIO twitter stream. […]