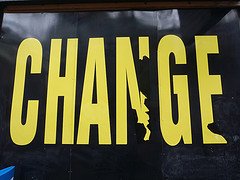 I’ve been writing for months (years?) about the changes coming to IT and the role of the CIO.  My “New CIO” topic is littered with posts about the changes being seen today and those changes that are coming down the road.

Many others have been writing about it too. Joel Dobbs talks about topic (and his previous musings on the topic) over on the Enterprise CIO Forum in a post titled The times, they are a changin’—Fast!. There are many many others out there writing about the topic too. At last count, there were 976K results in google on the “changing role of the CIO”.

I just wonder…who’s doing anything about the changing role of the CIO?

Is the CIO and/or IT group taking the reigns in hand and driving their future?  Or…are we in IT allowing others to plot our course for us?

Reading some of the articles/posts out there…I see many instances where the organizational leadership is directing the changes being seen by CIO’s and IT professional. Take for instance, the description of the creation of the “Chief Digital Officer” by Starbucks. This doesn’t appear to be a CIO or IT driven change.  Also…take a look at the recent hiring of a Chief Technology Officer at JC Penney’s.  Again…doesn’t appear to be a CIO/IT driven change.  But…both changes will lead to a dramatic effect on IT and the CIO role.

These organizational driven changes are happening for a reason. For too long, the CIO has been focused on ‘keeping the lights on’. They’ve been plumbers and electricians doing what they are asked by the larger organization…and charging an hourly rate to do it.

Now…every organization needs someone to keep the lights on. We need IT operations…a much aligned and overlooked aspect to IT. But…IT operations is becoming a commodity (or has become a commodity).  Do we need a CIO focused on operations…or do we need a CIO focused on strategic initiatives and how the organization can use technology, information and knowledge to grow and be more competitive?

The answer…at least for me…is the latter.  In fact, I wrote a post last year titled Splitting IT – Operations and Innovation where I touch on this very topic where I wrote:

I see organization talking about, and moving to, a split between Operational IT and Strategic IT.  Most organizations have already done this to a point…but i see this split happening much more broadly in the near future. Operational IT contains much of what we see today with IT operations. Security, servers, infrastructure, Support and all those things that help ‘keep the lights on’ for organizations. Strategic IT contains the enterprise architects, business analysts and business technologists.   This is the team that drives innovation. This is the team where you hire extremely creative people and point them at the business problems and ask them to solve those problems.  Maybe the name of this team/group changes from Strategic IT to something more along the lines of Business Technology…because that’s what they need to focus on.

A lot of the changes I’m seeing today in organizations are following this same type of thinking. The old IT guard are being relinquished to the “operational IT” group while the more progressive and forward thinking of those in IT are being asked to help drive technology from a strategic standpoint. These people are being moved into other groups in the organization and given “non-IT” roles…which is sad…because they could just as easily have done their role within the IT group…if the CIO & IT group would have had the foresight / ability to drive real change and value.

What about you…are you driving your change and complaining about others forcing change upon you?

Hi Eric, Great post. I think you’re spot-on with your recommendation to build innovation centers in IT. I attended a conference last week and got a look at what one of those innovations might look like. Dave Wieneke, Digital Strategist at ISITE Design, gave an excellent talk on trends in Digital Marketing. And he talked about the evolving role of online tools (websites, mobile, SM, etc) that businesses use to interact with their customers. Originally, those tools were considered to be an “add-on” to the traditional customer interactions. But more and more, those are not an add-on to the business,… Read more »

Eric, with all due respect, I couldn’t disagree more, and, in fact, just wrote a blog post last month that covers exactly this ground. ( http://www.peterkretzman.com/2012/03/14/it-consumerization-the-cloud-and-the-alleged-death-of-the-cio/ ) Truth is, no CIO worth his or her salt in the last decade (or more) has been focused merely on “keeping the lights on”, as you put it. Rather, the role of the CIO in any organization beyond the trivial has actually been to be the master juggler: a barrage of business projects, multiple conflicting priorities, uncertain requirements, integration needs, legal constraints, regulatory necessities, AND, yes, keeping things running.  But a relatively small… Read more »

Peter – While I respect your opinion, I disagree wholeheartedly. A recipe for “IT disaster”? No…in my opinion, the disaster has already happened. I see CIO’s and IT groups continuing to focus on the wrong things. I see CIO’s and IT groups who are so focused on their own importance and success that they fail to see how unimportant they’ve become. It’s responses like yours make me feel extremely disheartened for the role of the CIO and IT group. Rather than really think about what issues are at hand today…I read things like “I reject the false dichotomy…”. Go ahead… Read more »

Hi Eric and Peter, Interesting point-counterpoint. I actually hear a common theme in both of your Comments: the critical importance of organizational integration inside and outside of IT. Peter: you’re making the case that in order to be effective, IT needs to integrate Strategy and day-to-day IT Ops (and all the other traditional IT functions: software development, etc.). Eric: you’re making the point that in order to be a better strategic partner, IT needs to free itself from commodity functions and become more closely aligned with internal business groups. When reading both your Comments, my response was Yes and Yes.… Read more »

Eric, I think you missed Peter’s point entirely – likely because of his use of the word “juggling.” I understand how Peter is using the word – to reflect the ability to accomplish multiple objectives (throwing and catching numerous balls) with limited resources (two hands). I have no idea how that analogy precludes the ability to “provide real innovation and leadership or connects to your segue of “people who use process as a gatekeeper.” Peter simply used the juggler to illustrate the need for the CIO to address every need due to the inseparable nature of strategy and operations. And… Read more »

Spot on Peter. I could not agree with you more.

[…] One of my favorite IT Management bloggers, Eric Brown, wrote a thought-provoking post entitled The Changing role of the CIO. The post initiated a strong discussion in the comments of Eric’s blog, with two very clear […]