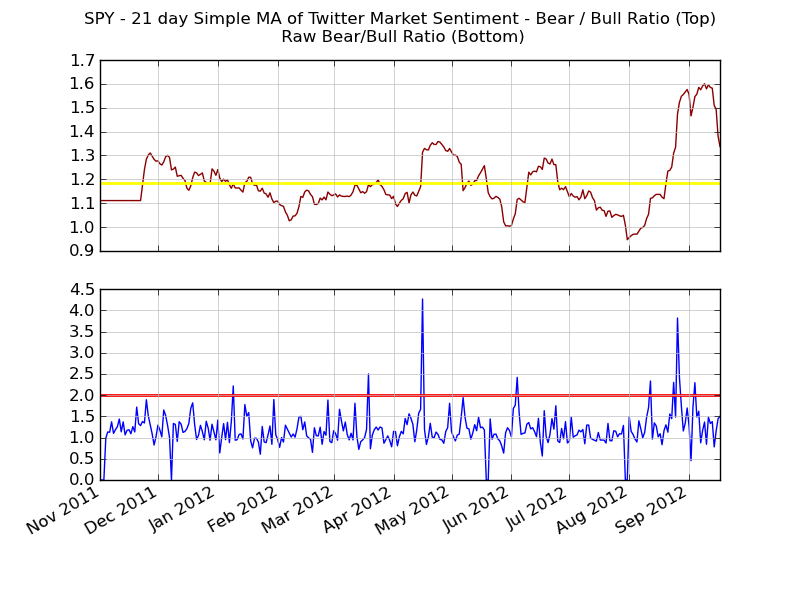 This is a cross-post from TradeTheSentiment.com

Before we get started…its VERY easy to look back and say “yes…that would have been a buy signal”.  If the market worked with hindsight, we’d all be millionaires.

Finding the “extreme” is going to be a very subjective approach. For the purposes of this study, I will use the Daily Bear / Bull Sentiment chart. When the sentiment spikes over a  2.0 (a level of 2.0 on the Bear / Bull chart means the sentiment is twice as bearish as bullish), I will go long.

With the above dates of extremes in mind, let’s take a look at how an investment strategy using these peaks would do.

Trade lasts 7 days and closes on March 28 when Trailing stop is hit for a Loss of $0.51 per share or a total return of -0.39% return on investment.

Trade lasts 5 days and closes on April 23 when Trailing stop is hit for a Loss of $1.41 per share or a total return of-1.09% return on investment.

Trade lasts 4 days and closes on June 8 when Trailing stop is hit for a Gain of $3.42 per share or a total return of 2.64% return on investment.

No additional Trades taken since Trade #5 is still active.

Now…this is by no means “proof” that sentiment can be used as a buy signal.  During this uptrending market, I could probably have picked any day at random and run this same analysis and got similar results. But…you can say that about any strategy, no?

Note: For those who point out that commissions aren’t included in this calculation, please note that a $50 charge for commissions ($10 per trade round-trip) will not significantly alter the outcome of this strategy.

In the next few days/weeks I plan to share more of these ‘applications’…stay tuned.

If you want to keep up with more of my market related topics, jump over to my Market focused blog at TradeTheSentiment.com.

This is a cross-post from TradeTheSentiment.com