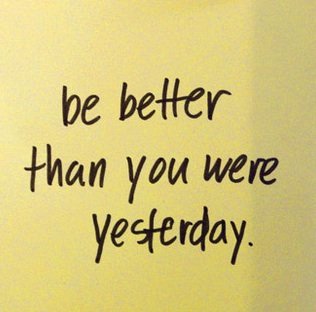 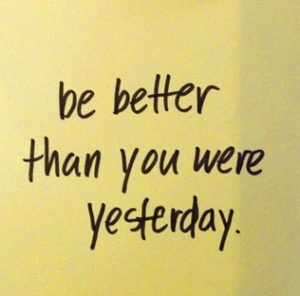 Let’s say, for example, that you decide to become the world’s fastest runner in the 100m race. That’s a lofty goal, but unless you are born with a very specific set of genes and start training very young, the probability of meeting that goal is pretty low.  That said, there’s nothing stopping you from pushing yourself to become faster than you were yesterday or last week.

If you aren’t the ‘best’ at something, does that mean you can’t win at that something (or at life)? Not at all. Even the absolute best have bad days.  Underdogs win all the time, which is why you should always continue to improve and become better than you were because you never know when your chance might come to be ready when the ‘best’ falters.

If you’ve not seen or read Moneyball (the book is here, the movie is here), you are missing out. The book talks about how the Oakland A’s baseball organization took the ‘B’ players and built a baseball franchise around them.  I don’t recall if there were any of baseball’s “best” players on the Oakland team at the time, but I do recall that there were a lot of the ‘also rans’ that many teams didn’t think were good enough for their team.

Many people will argue that the real story behind Moneyball is how statistics and data analysis can play a really important role in running a business. These people are correct…these things are important and they were an important part of the Moneyball / Oakland A’s story, but the part of the story that many miss is that these ‘B’ players also worked really hard to become better at what they did.  They didn’t just relegate themselves to be also-rans…they kept pushing harder and harder to become better than they were.

The same is true for corporations.  Maybe you don’t have a team comprised of the most talented and skilled employees, but if you and your leadership team continue to push yourselves and your people, you (and they) can do wonderful things.  If you build a culture of improvement where the smallest failures aren’t punished and show your team(s) that you are constantly improving yourself – and expect the same from them – your team and company will be able to compete. You may not win every time, but you’ll be around for the long-haul.

You can win if you aren’t the best. Anyone can. You may never be considered the best, but if you continue to try to get better, you’ll always be better than you were.

That said, just imagine if you don’t push yourself or your team to constantly improve? If you and your team are OK with being average, you’ll never have the chance to win.