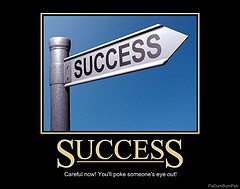 Are you ready to accept failure?  Can you live with yourself if you don’t succeed?

When I was growing up, winning was a big thing.  You won or lost. You won at sports.  You succeeded at school.  Or you didn’t.  There wasn’t anything good about losing…no ‘participation’ trophies…no recognition for losing.

Succeeding and winning was everything.

Everyone fails though.   Nobody is perfect.  Nobody succeeds at every thing they do. With success comes failure. When one person succeeds, someone else is most likely to fail.  That’s not a bad thing though…failure is acceptable if you learn from that experience, right?

Take an example from my new found interest….the world of trading & investing. In the investment world, nobody succeeds all the time.  Heck…most traders are happy if they have 50% win ratio (I’m currently at a 53% win ratio…and I’m ecstatic about that) The key to succeeding long term when you ‘only’ win half your attempts is to ensure you manage your risk appropriately. Peter Lynch, that icon of the investing world, sums up the idea of success / failure in the investing world with:

Failure is perfectly acceptable, if you’ve approached that failure correctly and learn from your failure.

Are you allowing yourself to be right six times out of ten?  Are you happy with a 50% win ratio?

How about a having win rate of 5% (1 win out of 20 attempts)?  Would that you make you happy…or angry? Most people would absolutely hate a 5% win rate.

But…some folks can accept that rate and move on.  They learn from their successes and failures.

Take OfficeMax as an example. Scott Brinker recently shared a story about OfficeMax’s digital marketing efforts in a post titled Experimental Marketing: 1 out of 20 ain’t bad.  OfficeMax had 1 successful website (their “Elf Yourself” website) out of 20 attempts.  They built 20 different websites, each with a reason behind it and expectation that it would work.

But…out of those 20, only 1 of them – the Elf Yourself site – succeeded.  The remaining 19 were quietly turned off.

Would you or your company ever allow a project to kick off that had a 1 in 20 chance of succeeding?  Probably not…but what if you kicked off 20 projects, each with compelling business cases, and only 1 succeeded?  Would you take the time to understand what worked and what didn’t in those 20 projects or would you fire the people in charge of those projects?

Success is wonderful.  Failure is just as wonderful…if you learn from it.

Now…in the trading world, you wouldn’t really want a 5% win rate…you’d quickly run out of money.  In the world of Marketing, IT and Technology…a 5% win rate isn’t ideal either..but sometimes you’ve got to have the guts to make a decision that might just lead to a low success rate on projects…and you might just learn a great deal about how to get better the next time.

Today’s IT project success rate is hovering around 30 to 35 % depending on what study you read.  Are organizations & IT groups learning from the failures of those projects that aren’t succeeding?  In my experience, no….those failed projects are written off and never looked at again.

So…are you prepared for failure?  Ready to accept it and learn from it?  If you want to succeed more in the future…you should be.

Image Credit: “Success 02 by By PaDumBumPsh” found on flickr. Make sure you jump over and read the small print…It’ll make you giggle…at least it made me 🙂

Published: Are you ready to accept failure? http://bit.ly/i2Lq4H #pmot

A very interesting perspective Eric! I’m actually in the middle of writing an article about how people “choose” to be successful!
Keep up the good work

[…] in previous posts that I’ve been working on improving my investing  / trading skills (see Are you ready to accept failure?,  How project management made me a better trader/investor and Revisiting Process – what is the […]