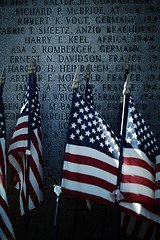 This post is a bit off topic from the norm but I wanted to take this opportunity to say Thank You to anyone who’s ever served in the armed forces.

For those of you outside the US, November 11 is Veterans Day and is also celebrated as Armistice Day / Remembrance Day in other parts of the world.

Its a day that we Celebrate and Remember our Veterans.

Its a day that’s celebrated as a federal holiday but few people truly take the time to remember the reason for this day.

This day should make you stop and think about those people who served, whether in peace or in war…our veterans have done more for us than most people give them credit for.

Those bastards of the Westboro Baptist Church can protest at military funerals because of our veterans. Sorry for the strong language…but its the mildest word I will use to describe those people.

People who spend their day bashing our government can only do that because our veterans have defended their right to bash.

People who call our President anything other than “Mr. President” have the right to do so because of our veterans.

While some people may disagree with reasons for war, nobody can disagree with someone putting their life on hold to protect this country and our freedoms.

Thankfully, he returned unharmed and has been able to lead a great life and has been a wonderful father to me and my sister.  There’s no words to tell him how thankful I am that he served his country when asked.

Very few Vietnam Veterans were ever told Thank You when they returned home, which I think is a travesty…hopefully those people that spat on our Vietnam Veterans saw Karma come back and bite them.

My great-uncle, Woody Kinnear, was a member of the 101st Airborne in World War II and saw action during D-Day and the subsequent movement through Europe.  He saw action in every major engagement in the European Theater including the Battle of Bulge.

I never got to say Thank You to uncle Woody before he died and I’m truly sorry for that. I hope someone, somewhere told him Thank You for serving.

Whether you’re in the USA or elsewhere, take a moment to remember your Veterans.  Say Thank You to them for serving.

Some Veterans show an outward injury…perhaps they’ve been physically injured in some way. But…many other Veterans are injured on the inside as well…they’ve seen things that they shouldn’t have to see.

The simplest act of saying “Thank You”, said with sincerity, can do amazing things to help that Veteran out.

Say thank you to a Veteran today….and every day.

[…] armed forces, past and present. November 11, 2010…4:23 pm. Veterans Day- Thank You! Jump to ComVeterans Day Thank You – In observation of Veterans Day, we express our sincere gratitude to the dedicated men and women […]

A Veterans Day Thank You – https://ericbrown.com/a-veterans-day-thank-you.htm

I just came across your article. Your uncle Woody Kinnear was my grandfather

Hi Greg – I think we’ve met before but its been a long time ago…thanks for stopping by!