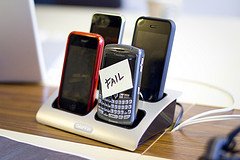 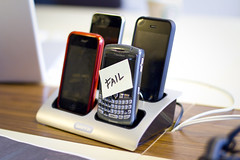 I ran across a great post this morning over on Boy Genius Report titled Open letter to BlackBerry bosses: Senior RIM exec tells all as company crumbles around him.  Its a long letter but very very insightful.

First off there are a lot of lessons to learn from that letter.  A couple of key sentences:

You have many smart employees, many that have great ideas for the future, but unfortunately the culture at RIM does not allow us to speak openly without having to worry about the career-limiting effects.

Rather than constantly mocking iPhone and Android, we should encourage key decision makers across the board to use these products as their primary device for a week or so at a time

The truth is, no one in RIM dares to tell management how bad our tools still are. Even our closest dev partners do their best to say it politely, but they will never bite the hand that feeds them

Strategy is often in the things you decide not to do.

Man…I’d like to find the person that wrote that letter and give them a high five.   If I were in a position to do so, I’d also hire that person on the spot.

I really love that last line –  “Strategy is often in the things you decide not to do.”  How powerful is that?

With this letter we get to see some real insight into the inner-workings and culture of RIM. If the allegations are true, there’s some serious culture issues within this company….and it will take some serious change to make any progress in the future.

I’ve traded that droid in for an HTC Incredible and love it. I’m tempted to jump into an iPhone I’ve so far resisted the temptations…we’ll see what happens with the next iPhone.

What would it have taken to keep me on the blackberry?  Looking back….a lot. I’d want the simplicity of the Android OS plus the sexy Apple design.    And we all know those are qualities that RIM has had a hard time with.

And…I think the above mentioned letter shines some light on why those changes never came about …and why they will most likely never come.

A look into RIM’s Culture? http://j.mp/kDa7aP

This is pretty amazing. I urge everyone to click through your link and read the original memo in its entirety. It surely has the ring of truth, and I’m sure a lot of other people in other organizations can read the dialogue and roll their eyes at how familiar it sounds. Bureaucracy, politics, appeasement, the loss of vision, it’s all the death of strategy. More than anything else what stuck with me though was the phrase “career limiting effects” of speaking out candidly. I’ve even heard it abbreviated, as CLM, or “career-limiting move.” People, if you ever hear “CLM” mentioned… Read more »

If "career limiting move" is in your firm's vocabulary, read this RIM senior exec internal memo on corrosive culture. http://ow.ly/5uUeQ

A look into RIM’s Culture? http://bit.ly/ltwkpx

”Strategy is often in the things you decide not to do.”- great article…
http://t.co/SqtXV38 (thx @happygeneralist for the blog link)

[…] innovation, challenge, adventures, excitement, and really wild things among all your staff–if everyone’s too afraid to speak up and challenge you then nothing changes. Especially if those challenges, like “Hey, you know […]

[…] It didn’t have to be this way.  RIM could have done more to save itself but I suspect the RIM leadership and culture wouldn’t allow it to recognize that things were bad and they needed to do […]